Share All sharing options for: JEREMY LIGGINS IS OUR NEW IRON GIANT 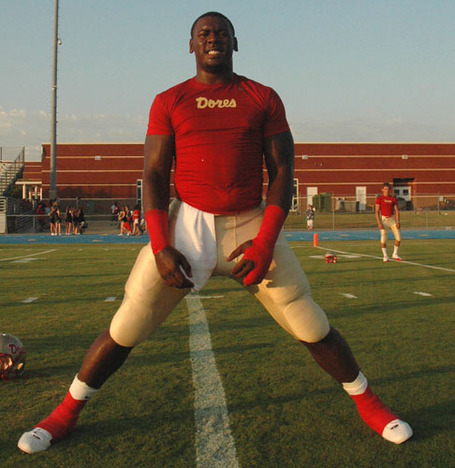 That is Jeremy Liggins. He played high school football at Lafayette High School located in the state of Mississippi, a place where corn syrup, greenhouse conditions much of the year, and a lack of portion control can combine with outstanding genetics to create very large people. He stands 6'4", and weighs 270 pounds unless he's just had lunch. He eats buckshot and entire deer carcasses for "lunch." The person standing in the background is a normal-sized human, and is his friend who rides under a hat Liggins wears at a prestigious restaurant while he tells Liggins how to craft flawless, innovative Nouveau Provencal cuisine. IRONIC SPOILER: neither likes the movie Ratatouille.

We assume the gigantic thighs, pained expression, country accent, ankles that are less "taped" than "armored" at this point, and massive hog-killing biceps mean that our favorite Create-A-QB from the first edition of NCAA Football has not only become sentient, but has run to Mississippi to find his own life. After years of being trapped in our XBox he was hungry, so he simply found a catfish farm somewhere and began feeding quietly at night, siphoning entire tanks of delicious tank-raised catfish like you would down a bubble tea.

Anyway, he's announcing tonight. His options are down to LSU and Ole Miss, and while he is reportedly leaning towards LSU, we expect him to do what something his size should do: stand up, announce his true plan to destroy earth on behalf of his masters, and then experience a change of heart before saving the world and a special boy who befriends him from a nuclear attack. When he puts on his LSU cap and rockets skyward mouthing "SUUUUUUPERRRRRMAAAANNNN", you'll see how right we were.

P.S. If he gets everyone into a restaurant in Oxford and then surprise announces for Mississippi State, Dan Mullen will be the King of All Trolldom.