Former Michigan coach and MICHIGAN MAN™ Lloyd Carr advised Michigan's young scholar-athletes on how to appreciate New Orleans in the buildup to and aftermath of the Sugar Bowl.

I have been asked to impart some of the knowledge of the city of New Orleans for the Michigan football team. As the former head coach of the Michigan Wolverines, I try to stay out of matters regarding the current team. An old man wandering the grounds speaking unbidden is an unseemly thing, but Coach Hoke has requested my assistance. When Michigan calls, you answer and do her bidding. She is our universal wife in this respect.

I can provide the following assistance in advising Michigan Men in the streets of New Orleans.

ONE: DO NOT POSE NEXT TO HORSES. 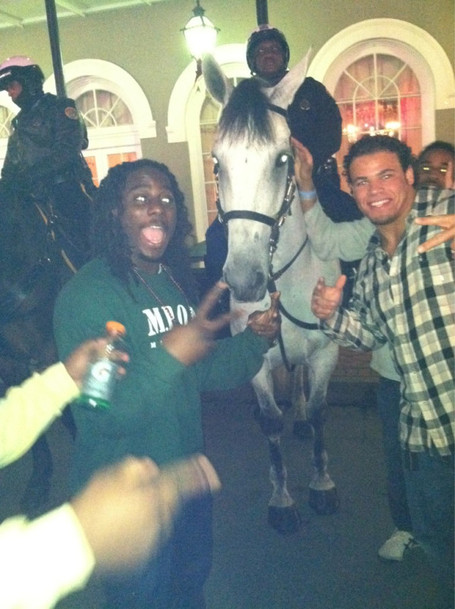 A Michigan Man is a man of means. He is only seen astride the noble animal, and never marveling at it. As Bo Schembechler himself said, a Michigan Man may only marvel at the sea of maize and blue on Saturday or the face of the Lord himself. Impress the world, but be not impressed with it, even if it is a policeman clearly drinking on duty.

(Many of you are from Detroit. You have seen the local constabulary in a state of disrepair before. Act like it.)

Consume only fresh meats and seafood in New Orleans. Do not show fear of shellfish. The iodine levels may be dangerous, but a Michigan Man embraces a certain amount of marginal risk. Bo Schembechler never flinched on fourth and life. Neither should you, Michigan Man.

Eschew oysters, however. The libidinal heat of this food of Aphrodite will heat the brain, and propel even the most rational Michigan Man to unsanitary quarters of the city. All quarters of New Orleans are unsanitary. Do not leave the team hotel unless on official Michigan business, or if there is a large fire.

A stroll along the river not looking backwards more than one block back to the less savory bohemian element should suffice the most swashbuckling young man's urges. The Mighty Mississippi will be your nightcap. Drinking it in with your eyes should quench whatever thirst for adventure you have. As it was enough for Huck Finn, it should certainly be enough for you.

Retire by 9, and read well-researched American History until you fall asleep. I am currently engrossed in Walter Wereheim's intriguing chronicle of the New England logging industry. Bold men, those foresters. I can scarcely wait until the steam age arrives, and accelerates the plot to a pitch I fear may be too exciting for my old bones.

The Crescent City is full of distractions. If you find yourself in a casino, leave immediately. Michigan Men only wager in private games, and never handle cash in public unless a.) it is handled by a member of your domestic staff or an assistant, or b.) you are helping return currency to bags in the wake of a bank robbery you have foiled.

If you do gamble, you must play baccarat or nothing else. If there is no baccarat table, demand one be built on the spot.

If this is not an option, you must then play poker. Fold on every hand. It is the gentleman's wager every time.

One other game of chance you may encounter in New Orleans does not inhabit the confines of a house of wagering. Roulette in the Russian fashion is common. Know that if you play, ask that all chambers be filled with bullets rather than one.

This approach may be extreme, but I personally watched Coach Schembechler win no less than thirty games of Russian Roulette this way. As he would say before spinning the chamber: "It will be hard, but those who survive a bullet to the head for a $40 bet in a game of New Orleans Russian Roulette will be champions."

FIVE: LADIES OF THE EVENING

The courtesans of the street should be avoided. Activity of this nature before a game saps the strength. Many of these women also carry social diseases including but not limited to:

I hope this helps. This old coach has enjoyed speaking with you fine men. Enjoy your bowl experience, and GO BLUE.