FRIDAY PROPOSED: THE PLACE WHERE YOU ARE FROM SUCKS

Share All sharing options for: FRIDAY PROPOSED: THE PLACE WHERE YOU ARE FROM SUCKS 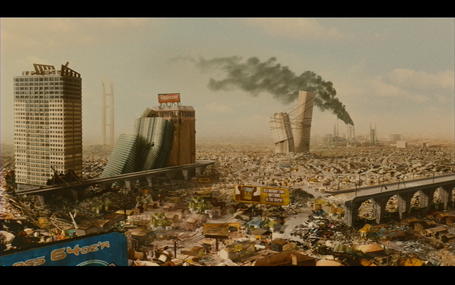 Being on the internet long enough will, after a while, turn you into the most bored rhetorical kung-fu seifu ever. Ad hominem? Deflect to side with humor block, ignore with Dragon Makes Wanking Motion. Single-issue screed? The Phoenix Lists To The West, blocks, then administers Slap of Inhumanity to the neck. Then, tea and the lotus pose over the Cat Gif Gorge, and your day on the internet is complete.

After a while it can get boring, which is why we have no idea how accomplished professional trolls like Clay Travis tolerate the tedium of poking the same dogs in the same cage over, and over, and over again. The fault lines you can reliably drop nukes in regarding sports are all the same. The resulting growling never varies.

So passes half of all sports commentary. The most reliable one of these is the geographic, since people generally have a very difficult time turning down the bait of someone telling them the place they live, the very earth they tread each day and may one day be interred within, is not the best place in the world.

This would all be prevented by accepting one very simple fact of life: the place you are from, for lack of a better word, sucks.

It sucks, and stop being so loyal to it for no reason other than "I live here." If this is the same place you were born, you should stop on principle. You did not choose this place, and instead fell randomly out of the womb and into whatever depraved hellhole you happen to call home. Years later, you declared it the center of the universe because...well, because you were there. No matter where you are, this is stupid, and you need to stop doing it.

If you decided to move there, feel even worse, because you don't even have the excuse of laziness to pardon your choice. But I moved to Omaha! Really? Well, whose fault is that? (Certainly not Omaha's.)

But but but I'm from [WHEREVER.] We mean it: put wherever in that space, and many, many things suck about it. Paris? Cold as hell, haughty for all that shit they did back in the 17th century, and now underappreciative of its best qualities like tiny streets for car chases, dance-punk bands, and Jean Luc-Besson. (We don't care how popular Besson is in France. They can't appreciate him enough.)

Oh but I live in New York. We cannot agree with you more! You do live in New York, and this condition will make up half of your conversations. Did you know things are expensive in New York, and that it is busy, and people really enjoy discussing how intense everything is? Oh my god, that branding meeting? It was like THE FALLUJAH OF BRANDING MEETINGS. The actual Fallujah of branding meetings was in Fallujah. Please be quiet about New York. If we wanted to live in an expensive Habitrail for humans where we never saw the sun and spent half the time waiting in line for food, we would live in Hong Kong and bypass the freezing weather. If we wanted to be a hopeless narcissist and proclaim how awesome this was from the solitude of our apartment on Tumblr, we can now do this from anywhere on the planet. Literally, almost anywhere, and many anywhere far cheaper than New York.

But but fuck you I'm in wherever. Wherever you live sort of sucks, and there are reasons. My god, there are reasons. Houston? IT'S HOUSTON. If we wanted crime and humidity, we'd shoot the difference. New Orleans? That's where the difference shoots you. Chicago? Freezing, boxy, and filled with Midwesterners who'd secretly rather be back home drinking 18 beers a night and filling out a sweatshirt. (You know you would.)

Miami? If you like Miami, you are a horrible person, and we feel comfortable saying that because we love Miami. Please remember that after OJ Simpson totally killed two people was not convicted of murder charges, he fled to Miami, where he made club appearances to the chorus of "YO, THAT'S FUCKING OJ WHAT'S UP OJ." Seven people in Miami are flawless physical specimens rich off illicit trade of one kind or another, and every other resident is some fun house mirror version of these seven people no matter their age.

The rest of the top 25 by metro area follow, along with the obvious reasons you should not buffet your fragile ego with their misunderstood greatness.

That's just the top 20 or so. Note that it doesn't include Atlanta, where we live. The monk pauses, feels the blow approaching in the mind before the body even initiates it...

And like where you live is so perfect....OH GRASSHOPPER. The dumbest possible counterargument to any critique of place, and the most easily defended if you are all too happy to concede the ground and counterstrike by pointing and laughing. (At you, flailing around like this is Rivals or Scout or some shit.)

Atlanta is as awful as any other expanse of hundreds of thousands of people squatting on the same stretch of land shitting, eating, and then shitting again on the same tired patch of earth. You DO have to drive everywhere. The crime is enough to make Baltimore nod in appreciation. A tree once knocked out our internet for three days. ONE TREE. SITTING IN THE STREET FOR THREE DAYS WITH THE CABLE PINNED BENEATH IT. This was not only inside the perimeter, but within striking distance of Little Five Points. It was later fixed when some brilliant person propped up the broken utility pole by leaning a backhoe up against it.

No, really. It looks so much worse than it sounds. 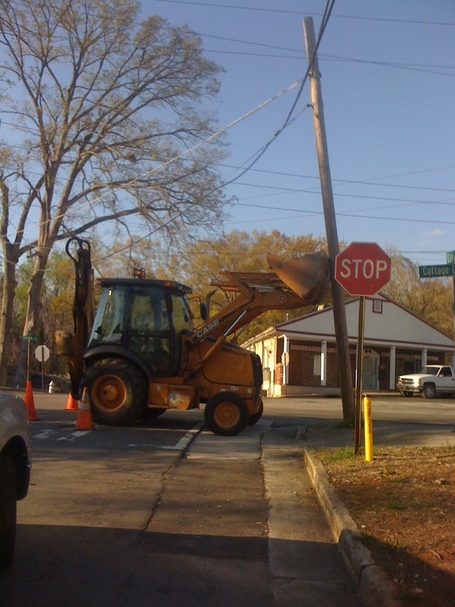 The sole solution the city and the mumbling kleptocrats who runt it have for anything is to slap giant metal plates over whatever the problem is. Potholes? METAL PLATE. Missing stop sign? METAL PLATE MONOLITH SAYS STOP. A vacancy at the school board impacting the lives of thousands of children? SAY HELLO TO DR. PLATE-METAL, SPECIALIST IN NOTHING. (Sadly, Dr. Plate-Metal is more qualified than the entire school board to do anything.)

Atlanta is, like most of life's shared spaces, horrible. You are an adult. You know this. You should accept it, and stop responding to it, and trying to mitigate it by saying, "No, you know, there are good things about having the Super Bowl in Indianapolis." No there are not. "You know, Birmingham isn't really that bad." Stop. Birmingham is the Johannesburg of America, and that's not a good thing. The person who said "hell is other people?" He was from Paris, the City of Light. Even Sartre knew that living together en masse was an exercise in voluntary squalor and silent loathing.

We also happen to like this horrible slice, and accept you like your horrible slice, too. There is no correct argument for "which place is better" without taking the attendant love or hate involved, unless we're talking about Columbia, South Carolina. It's awful, and a terrible sports town whose fans are losers who don't deserve a win, much less the glory of a championship.* (Like our guys do.) (In TOWN WE LIVE IN.**)

*We heard you like trollin' within your troll commentary.

**Which is not exactly our favorite town, that being Columbia, but whatever. It's no Shreveport.