Just when you thought Signing Day couldn't get more exciting, CBS Sports Net took things to the next level by snagging Rick Neuheisel AND Ron Zook. That's 164 combined wins of experience, insight, and success. What must it be like to soak up all that buttery coaching knowledge? We were fortunate enough to be provided with a preview of these two grandmasters in action. 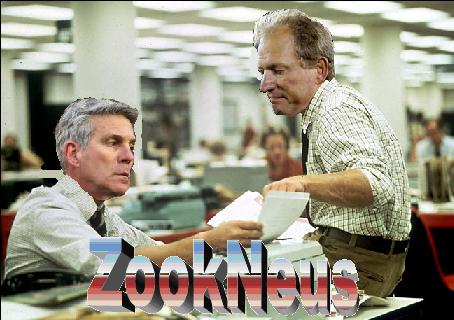 Coming to you live from Room 307 of the Extended Stay America in Yorba Linda, this is ZookNeus! And now, the kings of championship analysis, Coaches Ron Zook and Rick Neuheisel!

So do we just...like now? Talk to the sound thingy? Oh okay.
Today on ZookNeus, we're going to talk about Recruiting Day, which is NOT in my top five favorite days. No way does it beat National Pancake Day. Do you know how many visits you're allowed to take to an IHOP within the dead period? As many as you want!

PANCAKES! What I like about pancakes are their integrity. Flat. Round. Not full of crevices and hiding places like waffles. Waffles, stop pretending and just go be an ice cube tray.

Ice cube trays are actually the first thing I look for at a recruit's house. Got one? Don't want you. Water? Takes time to freeze. Time we don't got. Bagged ice is hustlin' ice.

Wait, you went to a recruit's house? I - I thought that was against the rules. Lane Kiffin told me that National High School Football Player Lottery Rule 3(b) only lets you call each recruit once, scream your name, and then hang up.

I don't think I want Lane to be my emergency contact anymore.

CONTACT! Oh boy, just that word gets me fired up. Best part of recruiting season. Get all your prospects locked in a high school auditorium, make each one wrestle you. Don't have to pin me to get an offer, but you better show heart. Even the best singlet can't contain heart.

Ron, I can't emphasize how important heart is in this process. All the organs are! Nobody makes it on my team without a thorough medical history. I want to know which of your parts are gonna sprain or break or tear. Injuries are gonna happen, and I welcome that as a coach. Without injuries, how will everyone on the team get a chance to play? Sure, we may recruit you as a long snapper, but I promise you, ol' Rick's gonna get you some reps at quarterback! I still keep x-ray film from every player I've ever had the privilege to coach.

FILM! Don't watch it, myself. Can't trust it. How do you know if it's real? I wasn't there. Haven't watched film since 1997. Walked out of The Saint with my wife. Couldn't stop talking about cold fusion. Wanted it. Energy. Wife says it's just made up, not real. Hated that. Hated Elisabeth Shue. Misled me.

Trust is such an important part of building a football team, Ron. Your players have to believe you'll be there for them no matter what, and that's why I try to get as many players as I can from local homeless shelters. That's how you build a locker room that sticks together. Mostly because that's where they all sleep. But you get the point!

WRAPS! That's what I want. Stuffed with chicken. Chicken and pork. Maybe some salsa. PICANTE.

COMMITMENT! Don't gotta be to football. Just gotta be committed. Once offered a barbershop quartet I saw at the county fair. Sung their asses off. Harmony. Unity. Wide Receiver!

Well, we're just gonna have to agree to disagree there, Ron. I coach by one creed: "It's the touchdowns you don't score that mean the most."

That's all the time we have today on ZookNeus. Thank you for joining us and, as always - WE'RE READY TO COACH FOR YOU, MIZZOU!