SO HE CAN CONTINUE DOING EXACTLY WHAT HE'S DOING. 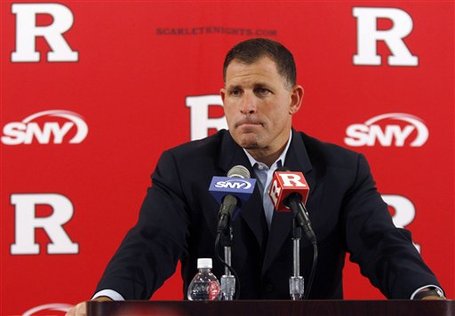 Greg Schiano left Rutgers in immensely better shape after a tenure in which he rebuilt the program, beat Louisville that one time (VIVA SAN SAN TE), and is now going to coach the Tampa Bay Buccaneers. Schiano, being a defense-first grinder who seemingly always went 8-4, seems perfect for the pro game while being an utter disaster as a resignator, leaving his team just prior to signing day. (To be fair, he alerted administrators with ample lead-in, and did his due diligence there by all reports.) Being under the gun and writing this in a hurry, we have no reaction but "Well, sure, and you'll go hire Mario Cristobal and keep going 8-4 and getting people to overpay for Big East tv contracts because 'Rutgers is New York's college football team.'"

A SHOCKING DISCUSSION OF SOMEONE BEING SHAMELESS IN A POSITION OF AUTHORITY. Big East Coast Bias points it out at length, but yes, Chuck Neinas, there is some deep irony in accusing Mizzou of being disloyal when you're in the midst of a pretty grand poaching spree yourself. YOUR GIRL CALLED ME, DAWG, DON'T HATE BECAUSE YOU CAN'T RELATE.

AN ATTRACTIVE STRUCTURE THAT CAN BE ROLLED. You do it to yourself, yes, and that's what really hurts, Auburn.

CREEPING SABANIZATION. Remember the maxim about generals always being ready to fight the last war? If Michael's expansion on the Creeping Sabanization of the SEC is accurate, then this is precisely what we have going on in our beloved league of dipstained hayseed champions all taking the wrong lessons from Alabama's success.

YALIES GONNA YALE. In every person's life, no matter their social station or education, one must choose between Harvard or Yale. Reading this expose of why Yale QB Patrick Witt's Rhodes Scholarship application was withdrawn, and you should be leaning slightly Crimson this morning, or at least until you remember that people from both schools are concocting elaborate plans to legitimate the sale of spare kidneys on the open market, and then rig a futures market on said kidneys to purchase a third estate in Connecticut.

THIS IS NOT REAL. It is however truthy enough to enjoy, and then weep for the lack of reading comprehension one must have in order to not be able to suss out football by buying a book about it.