Share All sharing options for: THE VERY REASONABLY TIMED TOP 25 FOR 2031

Even our vaunted Nation of SB is not fully protected from CLOWNFRAUDS like those at DawgSports who presented, last week, what can only be called a laughably childish set of rankings for the year 2031. Shame on you, Dawgs. Clemson at number 8? How can that even be when Clemson is stolen by Carmen Sandiego in 2022 and never found because I was too lazy to figure out where the Alhambra is?

1. Ohio State - Many thought the death of Urban Meyer in 2025 would mean a swift decline for the Buckeyes, and, at first, that belief proved to be right. Three straight four-loss seasons, tumbling recruiting rankings, disgruntled boosters - it all spelled doom for Ohio State.

And then Columbus launched UrbanEye.

An orbital space weapons platform capable of wiping out an entire city in a fraction of a second, UrbanEye is powered by the late coach's brain and has received more helmet stickers than every other Ohio State ever combined. We tremble beneath its deathly shadow and rank it number one.
2. Ecuador A&M - It seems like only yesterday that Russian President Mikhail Prokhorov gave Ecuador to the United States after getting a little overzealous with a chainsaw and sending Rhode Island to the bottom of the Atlantic. Sure, Ecuador was all "um hello we're an independent polity and what are you doing," but here we are all the same! A&M continues to dominate recruiting in the Southern Hemisphere, and visiting teams struggle to contend with culture shock. (Guinea pig is really a very refreshing sideline treat once you get over all the fur.)

3. Alabama - The Tide struggled to stop the run last season, but that should change this year with the arrival of juco transfer Giant Bug What Eats People. Though several have questioned how a giant bug could meet academic eligibility requirements, Nick Saban has refused to discuss the topic, insisting that he is "only focused on continuing the tradition of success at Alabama slash enslaving the human race." 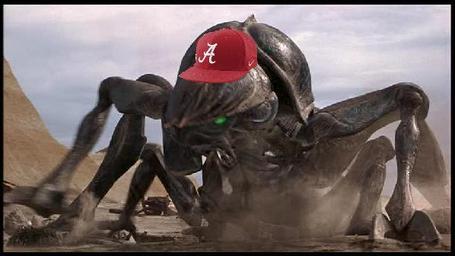 Giant Bug What Eats People announcing his decision and devouring a bus station.

5. Southern Cal - Remember, twenty years ago, when we thought that the population of California was undergoing some weird Children of Men situation because nobody there was having babies anymore? Remember five years after that when we all found out that, in fact, this wasn't an infertility epidemic but instead Lane Kiffin conducting the largest and creepiest mass kidnapping scheme ever? And then we were so baffled that we just let it slide for some reason?

That's really paying off for Kiffin now that all those kids are college-age.

5. Florida - Voters were outraged last year when newly elected Governor Brad Kirkland, a fourteen year old who hates reading, made his first executive act a wholesale declaration that "all fun shit is now legal." Several suits have been filed seeking, at a minimum, some clarity on what is "fun shit" and what is just crime. Commerce and public welfare have suffered enormously. The Gator staff saw this as an opportunity, however, and hauled in a top-ranked recruiting class based on promises of smoking weed while riding a stolen golf cart into Library West. 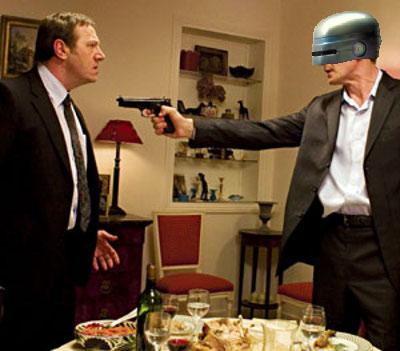 Impossible to prepare for because he appears without warning. You go through the whole week thinking "man, we really gotta stop the Michigan State run game" and then BOOM! Robo-Neeson's killed your opponent and wants you next.
7. Wisconsin - Even with nearly two decades of a head start we didn't have time to research this fully, so this one is just random. If it makes you feel better, maybe this spot will be UCLA's! (Note: it's never UCLA's.)

8. The Elusive Migratory Team of Brigands Formerly Known as WVU - October 8, 2027. The West Virginia Mountaineers board a charter plane to Lubbock, a plane which, when it lands, has no passengers. The team seems to have just disappeared mid-flight and the rest of the season is forfeited. A memorial service is held, though confusion, not grief, marks the occasion.

Then they reemerged. A team without a home stadium, wandering the country. You can't schedule them because they have no athletic department to call. But they'll make their way to you. Practice after practice, they'll sit in the bleacher, eerily silent. Eventually, you'll break, and challenge them. And it's in that moment you've lost. 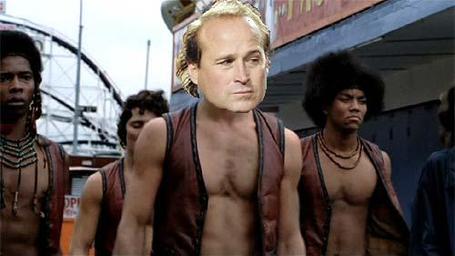 9. Boise State - Sure, they haven't lost in seven years, and they single-handedly drove back that Chinese invasion, and they invented an energy source that allows cars to run without gasoline and emit dope beats instead of exhaust fumes. But they still don't play an SEC schedule.

10. UC-Forbidden Zone Time Darkeners - You're probably wondering what sort of space-time collapse occurred to create this bizarre branch of the California state college circuit. The answer is none, because this is just what you get when the marketing department at Berkeley is improperly supervised; "Forbidden Zone Time Darkeners" is an extremely popular 2031 cartoon for children that is basically Voltron covered in wristwatches.

11. Virginia Tech - The future is really a glorious place. Our developments in food resource management alone would strike you as nothing short of impossible. To us, the year 2012 looks much like the year 1922 might look to you. Yet ours is an imperfect society, as we still have no damned clue where to rank Virginia Tech.

12. Georgia - Like so many Georgia seasons before it, this one opens with looming questions about the coach's future. Yes, he's been there for what seems like forever. Yes, under his watch the program's had some of its most outstanding years. He continues to recruit well. Were he to leave, there's no doubt another school would hire him in a heartbeat. But we have to ask: 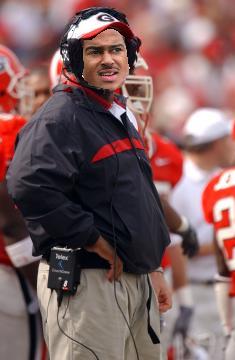 Is Coach Reggie Ball still the man to lead Georgia?

13. Kansas-2 - Alternate universe Kansas is an absolute juggernaut, talented and disciplined at all phases of the game and blessed with an extremely deep roster. In their home universe, Kansas-2 players have an almost preternatural ability to echolocate, which allows them to read coverages and formations much faster than other players. Unfortunately, one melody can completely disrupt that sonar, leaving the Jayhawks paralyzed.

14. Oregon State - In the late 2020's, those who claimed Nike's revolutionary new TDNet+ uniforms were a step too far were derided as crackpots and luddites. After all, cleats, pads, and helmets with nanobots sounded crazy awesome even if nobody knew what the hell that meant. It wasn't so awesome when TDNet+ became self-aware, forcing the Ducks to destroy their football program. But hey, their loss is Oregon State's gain!

15. Ryan Seacrest University Glimmers - Applying the American Idol method of determining a starting lineup may seem crazy to you, but by 2031, RSU has proven that it is the perfect combination of efficiency and entertainment. (We could do without the post-touchdown renditions of "Sail On," however.)

16. Tennessee - Reminder: this is actually Texas. 2031 is the second year of a five year deal in which Tennessee offered the Longhorns $23 million to change their name, logo, and mascot just to get something positive associated with the Vols for once.

17. Towson - When the University of Maryland sold its football team to Towson University in 2020 because they needed money to pay past-due electric bills, Towson AD and former Vice President Joe Biden seized on the occasion. Step 1 was having the team dress as ninjas without any names or numbers to hide their identities and confuse opponents. Step 2 was Biden challenging the visiting coach to a sake bomb drinking contest at halftime. So far, there is no Step 3.

18. Notre Dame Fightin' Taco Bells - I probably shouldn't tell you since you can stop it from happening, but starting in 2018 society decides to trick Notre Dame into thinking the world is just like the future depicted in Demolition Man. (They even do the three seashell thing, which is hilarious.)

19. Cinciconncuseton Florida - Frustrated by conference instability and feeling like the butt of every college football joke, six Big East teams decided to form a cooperative and stand up for themselves. They win 9 games a year but always lose to NC State. And the logo...yeesh. 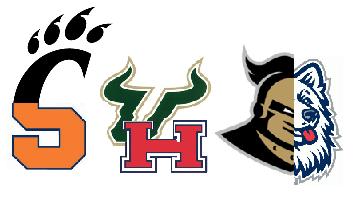 20. Oklahoma - The shadow hasn't yet lifted over the Sooners. Even though the NCAA ultimately decided not to strip the school of its 2029 Big 12 Championship, fans are still unsettled at the thought that the man leading this program for the last six years has been Mike Stoops in a crudely fashioned Bob Stoops mask.

21. Miami - The little MAC team that could has really broken out in the last few years, with signature wins over Iowa, Louisville, and Mississippi State. They continue to develop talent and - what? Oh. No, that other Miami hasn't existed for years.

22. A Sentient Cloud of Electromagnetic Energy Not Within the Visible Spectrum of Light and Affiliated with the Sun Belt Conference - The cloud formed over Illinois sometime in late 2017. By 2019, the Big Ten had expanded to include the cloud, claiming that it was "a natural fit for our conference because we love technology and know about it and even hooked up this printer ourselves." Things deteriorated quickly, however, once the Sentient Cloud Scantron Scandal came out (yes, we use scantrons for the rest of this geologic age) and soon the cloud was asked to leave. Sun Belt membership has suited the cloud nicely, however, and it's possible it could be this year's BCS buster. 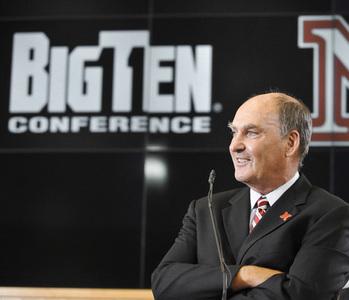 23. Saginaw Valley State - Was there a time when this team wasn't the dominant program in the state of Michigan? I certainly don't remember it.

24. Washington Redskins - When owner Dan Snyder self-relegated his team to Virginia high school Division 2, he promised the Skins would return to the NFL soon after "earning their way back to the top." Six years later, they finally won the Division 2 title and are now poised to jump into intercollegiate competition. A nine win season with a January bowl berth would be a real accomplishment for this team.

25. The December 1981 Cast of Battle of the Network Stars - Due to the limits of time-travel, this team has no choice but to stick with Scott Baio as defensive coordinator. Lorenzo Lamas has "bust" written all over him. Melissa Gilbert cannot protect the football. But you can't count this team out as long as they've got TRAPPER JOHN, M.D. 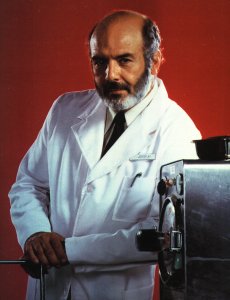