FULMER CUPDATE: YOU GET NO BONUS POINTS FOR SMELLING SO DAMN GOOD

Share All sharing options for: FULMER CUPDATE: YOU GET NO BONUS POINTS FOR SMELLING SO DAMN GOOD

The Big Board was wrought from the massive hands of Boardmaster Brian. Are you outraged at the pipeline that sprang up in your backyard? That's his penis. He has to put it somewhere, you see, just as Reggie Nelson has been known to spool his around random ferris wheels. Scores in the Fulmer Cup and explanations follow. 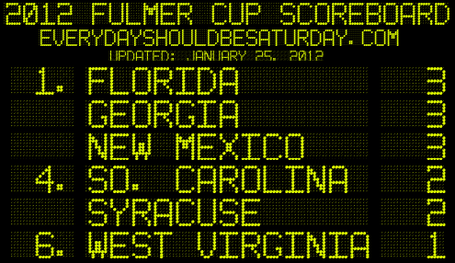 NEW MEXICO. Mike Locksley is gone, but the rage crackling around every surface in Albuquerque found a new conductor in quarterback Ryan Trujillo, who in a dispute outside Weck's ("A Full Belly Tradition Since '91!") with his girlfriend wrestled the keys away from her AND THEN MACED HER WITH HER OWN PEPPER SPRAY. There are many things a relationship can recover from, but being pepper sprayed doesn't seem like one of them unless you're into that, and holy shit did we just find a new and extremely inconvenient sexual fetish to never, ever adopt.

Despite how it sounds, Trujillo was charged with a battery against a household member, a misdemeanor worth one point. We'll add in the hitting girls bonus (Pepper spray counts here) and tack on an OMG YOU DID NOT JUST PEPPER SPRAY YOUR GIRLFRIEND OUTSIDE OF A PLACE WITH FINE CLUB SANDWICHES, and take New Mexico up to three points and a tie for the lead in the Fulmer Cup 2012.

SYRACUSE. The suavest crime will always be advanced jewel thieving thanks to a childhood of Pink Panther movies, but the second suavest? Cologne theft, which is really less about stealing than uniting sexy with its natural odor. That's what we used to tell the clerks at Dillard's, and we'll be damned if they didn't buy it!* Quarterback Terrel Hunt clearly agrees with this theory, which is why he was walking out of a store with a bottle of Breakline cologne for men from the Hollister store at Carousel mall. That's one point for Syracuse for just wanting to smell too sexy for their own damn good. Sexy shouldn't be against the law, but whatever, Country-who-bans-opium-and-lawn-darts.