AND NOW IT IS TIME FOR THE QUICKENING CEREMONY, MIZZOU. 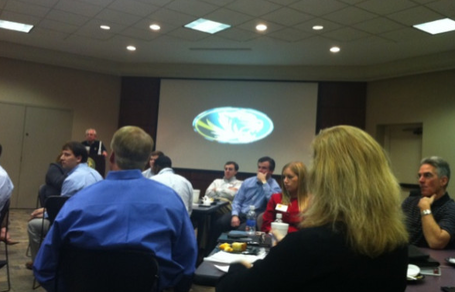 The hardest part for Mizzou officials meeting with SEC officials for orientation wasn't Mike Slive ringing in the ceremonies with a cowbell, or the cheese grits, or informing them of the holy trinity of SEC consumer fandom (Golden Flake, Chick-Fil-A, and Dr. Pepper, a diet guaranteed by the FDA to induce aerosolized viral diabetes in seconds.) No, the hardest part was the branding session, which took hours, and whose screams could be heard for several blocks through downtown Birmingham. (It hurts more, but the silhouette of Bear Bryant seared into your shoulder for life is going to get you so much church ass, guys.)

SOMEONE FIRE SOMEONE. The double chin on the Gators logo is gone, but like most double chins you'll hardly mourn its departure. Really, though, all SEC mascots should have double chins if we're being perfectly honest here.

SURE ACT LIKE YOU'RE SPECIAL. Jarrett Lee and T-Bob Hebert will be grand marshals for Krewe of Zeus, and that's really great and all, especially because it gives us the chance to make jokes about Jarrett Lee accidentally throwing beads to unattractive men when he was aiming for a young lady. However, Tyrann Mathieu will be over with Zulu and his mother, THE ZULU QUEEN, which is like the coolest thing one can be at Mardi Gras.

CENTRAL MICHIGAN, FIRE UP! Sure, you knew that Boston College and Rutgers would be overrepresented in a Super Bowl. (How could they not be, really?) But there, amidst the Floridas and Michigans, which school is sitting there with four former players in the Super Bowl? The Chippewas of Central Michigan, clearly one of the nation's greatest fonts of football talent.

THE OFFSEASON IS IN FULL SWING AT OKLAHOMA STATE. This truly is a moment for OK State, as they are experiencing new triumphs, while preserving treasured old habits. When asked for a reaction to either story, former offensive coordinator Dana Holgorsen shrugged,and then just asked Mr. Mittens what he thought of it all.