ANOTHER DREAM DEFERRED. We have so many dreams left to fulfill: practicing law without a license, rewriting the Song of Fire and Ice cycle as a battle between warring medical supplies salesmen, visiting Freddie Mercury's memorial in a dress, and yes, being the person who gets to scream "STOP THE PRESSES" when something like this happens. 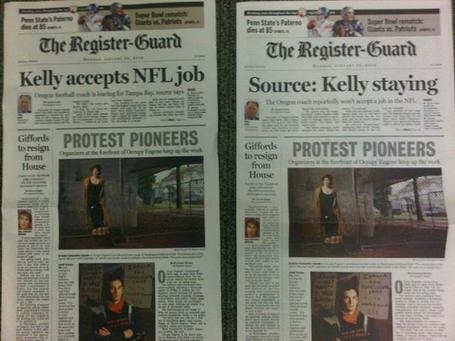 So after the haze of Twitter report, and then Twitter report, and then Twitter report, we have this. At one point last night, Chip Kelly probably accepted the Tampa Bay Bucs coaching job, and then changed his mind. In the meantime Oregon fans hyperventilated, Boise State fans strapped Chris Petersen to the mast and put paraffin in his ears to keep him from hearing the songs of Phil Knight's sirens, and everyone wondered why in the hell a spread option coach like Kelly would go to the NFL, much less why he would opt to take an offer with a team that had lumbering cannonade Josh Freeman at quarterback.

Fortunately for tidiness's sake, Kelly will remain at Oregon, most likely with a massive raise from Phil Knight and the new added fun of everyone freaking out every time a new job comes open in the NFL. There is plenty of historical precedence for this kind of epic waffling. The recently departed Joe Paterno pulled the exact same move at Penn State with the New England Patriots, and Steve Spurrier himself nearly took the Bucs job in the mid-1990s. All we remember was

FURTHER PATERNO TRIBUTES, ETC. You could spend the rest of your day reading through Paterno tributes, so why don't you do that? Bruce Arthur's piece focuses on the complexity of Paterno's legacy, while Bomani talked with Lavar Arrington, who was clearly in a very particular and painful place yesterday. Sally Jenkins was his last interview, and details Paterno's need to talk even as his body failed him. Michael Weinreb echoes the emphasis on "complicated."

AND ON THAT PREMATURE REPORT OF HIS DEATH. Clay's wondering how CBS fucked up as badly as they did, and there is one answer: because they piped in Onward State without corroborating, which is way bad. Yes, we would be giving ESPN a hard time if they did this, but to be fair at least CBS tries to correct its mistakes, and not defend them even at the expense of a court case. It should also be noted that the accuracy of this report was terrible by 21st century standards, but rigidly precise by those of the 16th century.

WE CAN DEFINITELY DESCRIBE THIS AS A "HIRING." The days of the spread are over at Auburn, or at least Dr. Gustav's Spread. Auburn has hired Scot Loeffler, former Florida qb coach, Michigan assistant, NFL assistant, and the coordinator of the Temple offense this year. Lloyd Carr really likes the hire, and that may not be good. As for us, we remember his legacy at Florida well. Gene Chizik hired Gus Malzahn and Brian Van Gorder, and he hired Ted Roof. There is literally no telling how good this hire is, but at 37 Loeffler is young, has been around some very good offenses, and cannot be dismissed out of hand as having NFLAIDS or any other afflictions that would make him a specious hire. (Except for Lloyd Carr liking him.)

HE APPRECIATES YOUR CALMNESS, CHILLUMBIA, MISSOURI. Dorial Green-Beckham doesn't say much, but he does appreciate Mizzou fans not being insane. This hint at DGB favoring a school that is sane about its recruiting immediately eliminates the rest of the SEC completely.

ETC: Summer of Mallett makes a surprise Super Bowl return, you skanks. This tire's third bounce is, by our estimations, at least 8000 feet in the air. NNailed it, B1G!