THIS IS HOW PEOPLE GET SHOT. Just when we thought the Billboard Wars of Mississippi had died down, here comes Southern Miss charging, drunk and surly and flush with newly won casino dollars, reviving the fight at its lowest ebb. 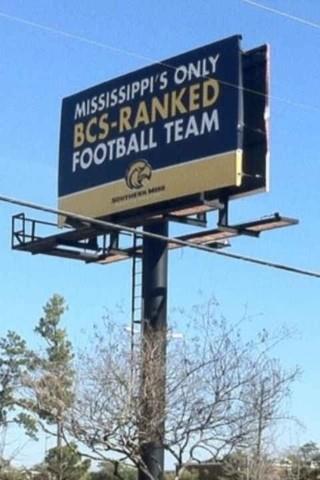 (Via.) Somehow, when the smoke clears, we'll all look back to this as the moment when we could have prevented Alabama building a giant billboard to block out the sun over Mississippi. Those of you remembering it in Mississippi, if you somehow survive, will be doing it with rickets.

VENABLES IS A WORD FOR ASSETS OF SOME UNDETERMINED VALUE. It really should be, at least, as in "We traded 38 venables for gasoline enough to reach Perth unharmed." We should also mention this would be slang in a Road Warrior-themed universe we've been dreaming a lot about lately, and that in this world Lord Humungus looks a lot like Lane Kiffin, yes, right down to the flowy, untucked shirts he wears with the hockey mask?

Anyway, Oklahoma faces their first major shakeup in quite a while in losing their longtime defensive coordinator to Clemson. Bob Stoops best have a plan, while Dabo's CEO plan at Clemson rolls on: hire smart people, and then spend your time recruiting your ass off and serving as the enthusiastic, occasionally ranting face of the program.

EL PASO CLAIMS ANOTHER VICTIM. This time the victim is Phil Smith, offensive lineman for Georgia Tech, whose breaking of rules at the Sun Bowl has him off the team permanently. The siren song of Juarez: resist it, you must.

JOSH CHAPMAN IS NOT A WEAK OR EASILY DISSUADED MAN. Alabama's nose tackle played every game in the 2012 season following the Tide's victory at Florida for Alabama with a torn ACL and meniscus in his left knee. This follows up a 2011 campaign where he played with a torn labrum for a good chunk of the season.Todd McShay likes his size and speed, but isn't sure about his toughness.

IN DELAYED JAB RECOGNITION. We really should have linked this a few days ago, but Big Ten fans jabbing at oversigning is rarely done this well or without the screeching noises that usually accompany it. Speaking of Michigan men, they may not have liked Michigan recruit Yuri Wright's fascinating online commentary. (All he needed was some pussy, guys. It says that like eight times in 15 tweets. Duh.)

PEOPLE IN POWER ARE NOT AS AWARE AS YOU MIGHT THINK. That's the chief takeaway from much of the testimony of Penn State board members who made the decision to fire Joe Paterno.