NO, DRE KIRKPATRICK'S ARREST DOESN'T COUNT IN THE FULMER CUP

Share All sharing options for: NO, DRE KIRKPATRICK'S ARREST DOESN'T COUNT IN THE FULMER CUP

We were working on a mothership piece for the am most of the afternoon, but break the silence for this Fulmer Cup ruling on Dre Kirkpatrick's weed arrest in Alabama. If he were an eligible player in the Fulmer Cup, then this would likely be a one point weed possession score and little more for Alabama. We'd make a joke about how the Manatee County PD certainly didn't forget about Dre! We'd giggle, probably a little more than we should, and then a spirited discussion of Justified would break out in the comments. #teamArt 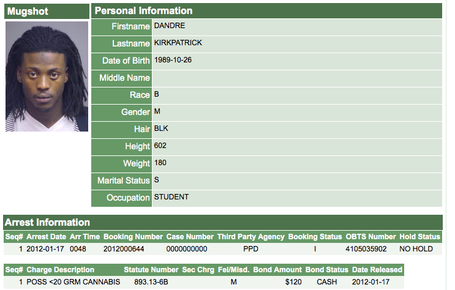 However, none of this is going to happen. Fulmer Cup bylaws state that players must be currently enrolled as students and listed as members of the football team. As someone who just declared for the draft, he is now a professional, and no longer qualified to score points in the Fulmer Cup. Do not ask us about exceptions, because that is annoying as hell, Auburn fans.

No points awarded, mercy on your souls, etc.