A GREAT RUMBLING OF BASS IN NORMAN (POSSIBLY)

Share All sharing options for: A GREAT RUMBLING OF BASS IN NORMAN (POSSIBLY) 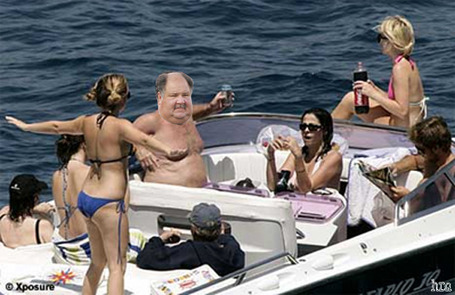 Mark Mangino was fired from his job as head coach of Kansas for being Mark Mangino: a demanding, profane, and unpleasant dick of a human being who screamed until his team began to play competent football. Then Kansas forgot how it got there in the first place, which came through a lot of Mangino being a dick in the way that aggressive people without tact working in a stressful situation can be. Then they hired a very nice man, and that worked out brilliantly.*

This is bad, but please remember also that football coaches are not paid to be nice or abusive. Mangino landed somewhere in the middle between un-nice and abusive, though accounts of his behavior towards players did lean towards "Inhumanly nasty." (A nastiness accompanied by a lack of awareness of artificial turf's heat absorption properties, too.)

More than anything, Kansas seemed tired of him, and he just seemed perpetually angry at anything that moved, and all that rageahol dependence meant an intervention was inevitable and perhaps overdue.

Every rehab case needs a halfway house. Enter "Prairie Whispers, a Bob Stoops Property," aka the Oklahoma coaching staff. After taking in Willie Martinez after he was fired from Georgia, Stoops also took in his brother after his unfortunate eviction from Arizona. (Let's face it, every American at one point will leave Arizona under shady circumstances. It's a law or something.)

Now the possibility of Mark Mangino returning to the sidelines as the newest resident of Bob Stoops' pet shelter for indigent coaching dogs has been floated by Barry Switzer. Our initial thoughts is that it's well past time for a Mangino return tour: while he's probably still mad dickish as a coach, his talent is probably undiminished, as well. There is the slight issue of who he'd be replacing on the OU staff, but us even hearing about this probably indicates some dissatisfaction with the current personnel.

Still, any return of Marky M to the college football constellation would be a welcome one, especially in light of what we now consider a proper reason for firing someone. <----THIS STANDARD HAS CHANGED DRAMATICALLY.