It is a historical pattern for South Carolinians to fire first, so it is only appropriate that the Gamecocks begin official scoring in the 2012 Fulmer Cup. It would also be all too appropriate if, after the opening salvo, the South Carolinians in question said "What y'all got, BITCHES?", and were then demolished in the rest of the fight by a bunch of angry guys from Ohio and Maine burning down their possessions. This is saying that Ohio State is an early favorite to win the 2012 Fulmer Cup, and a bold prediction that Urban Meyer will literally burn down homes in South Carolina just to amuse himself as a prelude to the inevitable South Carolina/Ohio State Outback Bowl matchup.

The first points of the 2012 Fulmer Cup are awarded to South Carolina for the arrest of Byron Jerideau, a redshirt junior defensive tackle arrested in Columbia's vortex of minor criminal behavior, Five Points. (Blake Mitchell nods, and sips a beer quietly in the corner in your honor, Byron.) Jerideau's arrest for "disorderly conduct" early Friday morning comes without details of exactly how disorderly Jerideau was, but the mugshot from the Richland County Jail is pretty special all by itself. 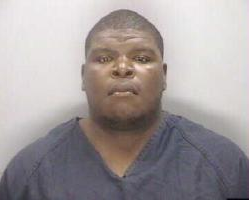 WHAT DO YOU MEAN TACO NIGHT AT THE RICHLAND COUNTY JAIL WAS LAST NIGHT?

A misdemeanor disorderly charge is usually a single point, but Jerideau does receive a bonus point for being the first in the pool, thus bringing the Gamecocks total to two points in the 2012 Fulmer Cup. Scoring has begun, let Loki be praised.