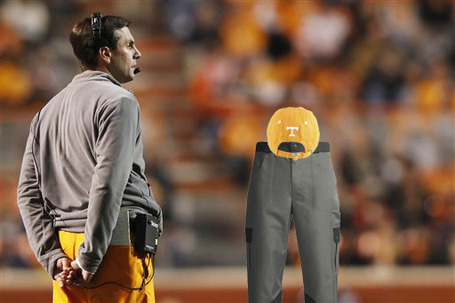 KNOXVILLE (AP)-- Derek Dooley needed a defensive coordinator with experience, and he believes he has found just the man for the job.

The University of Tennessee announced the hiring of an old pair of Nick Saban's riding pants as defensive coordinator on Friday. The replacement for the departed Justin Wilcox will make something in the $500,000 range annually under a three-year contract, and will dive immediately into recruiting the Vols' 2012 class.

Coach Riding pants had no comment during a brief press conference on Friday. He lay on the back of a chair, appearing freshly pressed and ready for service.

Prior to his arrival at Tennessee, Coach Riding Pants served as the riding pants of Nick Saban at Alabama. He is most well known for his work with Saban in his successful rides of Oatmeal Pie, Saban's prize miniature horse and assistant strength and conditioning coach.

The hire of Coach Riding Pants is just one hire Dooley expects to make in the coming days to replace numerous losses on the coaching staff at Tennessee. Dooley had no comment on future hires, but candidates include other former possessions of Nick Saban including Coach AM/FM Weather Clock, Coach "Rhythm of the 90s, Vol. 1" , Coach High-Power Vibrating Abs Belt, and Coach Twenty Tommy Bahama Shirts Twisted and Taped Together To Look Like A Human Body.