IT'S FRIDAY AND WE'RE SLEEP-DEPRIVED. 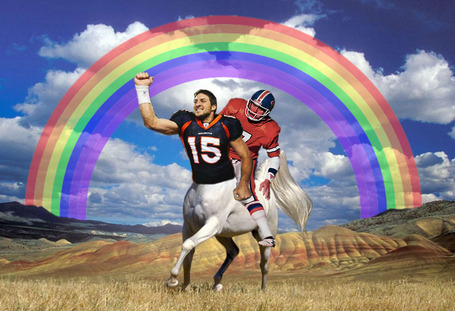 We have no idea what this is, but so happy Matt Ufford made it.That's a legitimately beautiful image right there, and should perhaps replace Colorado's state flag as the state's symbol.

HELLO RECRUITING. We wrote a thing at the mothership on recruiting, and included three suggestions for alternative unveiling strategies for recruits. The one we had to cut was "wear sunglasses, then unveil contact lenses with the symbols and letters of the teams on them," but that's still a perfectly good idea should a recruit want to just pick that up off the ground. It's just waiting for you there on the ground, there.

AND THAT IS WEIRD. A reduction of scholarships from 85 to 80 is going to be one of the recommendations from the NCAA working group, with a suggested start date of 2014 for the reduction. The reasons for this are cost-cutting, for the most part, and doesn't that make sense with a possible renegotiated tv deal for the BCS coming up! Don't ask Mark Emmert about any of this, because he's not making any sense for now or the foreseeable future.

EVERYONE IS LEAVING. Well, not everyone, but the LSU and Bama defections are significant, with one surprise in that group coming in the form of Rueben Randle leaving for the NFL. Ramgod is PLEASED, young Rueben, though LSU fans may have to take to Cajun Pot Roast consumption in their sadness at your departure.

STEPHEN IS SORRY. Garcia says he should have listened to his mentors at South Carolina, and is now trying to get in shape and ready for tryouts for the NFL. Best of luck, Andiambro.

HAHAHAHAH DRINK LESS BEER. We will say that one danger of drinking less beer and more wine, Paul? It's that wine is not filling, and thus goes down like water.