Share All sharing options for: THE FULMER CUP ARRIVES: RULES AND REVIEW

The Fulmer Cupdate is brought to you by Brian, who because he makes the board for free is referred to in this space as well-hung in a manner comparable to Reggie Nelson, Florida great and EDSBS icon. 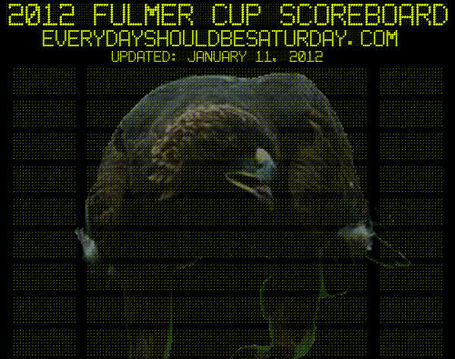 We sadly announced the opening of the Fulmer Cup via Twitter on Monday night from Capdeville in NOLA. We had to do this a few words at a time, since the table was being pushed over by Alabama fans drunkenly tipping the entire place sideways. A SPECIAL NOTE: those same Bama fans also pulled my laptop out of the way, cleaned up and apologized after they nearly killed the EDSBS computer, and even helped beleaguered servers hand out food to customers. We have to revise our understanding of the Crimson Tide fanbase in ways we are not comfortable doing, but it's 2012 now, and flying cars and diaper wipe dispensers that don't make us want to kill everything in a five mile radius will be our reward.

The Fulmer Cup is the one and only competition designed to answer the question, "Is your team truly more inclined to criminal behavior than mine?" This is established by assigning a point value to crimes and misdemeanors, keeping a tally of reported crimes, and then assembling them into a measure of that team's offseason accomplishments.

The rules are getting a bit of a tweak this year to avoid some confusion or awkwardness down the road.

THE SCHEDULE. The season started the minute the national title game ended on January 9th. We only tally the offseason because there is simply too much going on in season, and also because the offseason is the time when programs rely most on players to conduct themselves well without the supervision of staff. That's typically when things go awry.

The Fulmer Cup season ends the day before the first day of the season. We figure college football, like Sparta, should have one day where players should be able to run around and slaughter helots as they please. Not coincidentally, this is what every single day in Gainesville, Florida is like for athletes. Hogtown: It practically recruits itself!

WHAT COUNTS: Documented crimes committed by currently enrolled players in Division One football programs. On very special occasions, the coach of a school arrested would count. (See Pinkel, Gary.) On others, you might even have the athletic director chipping in. (See Evans, Damon.) Those are special occasions, and are left entirely up to the discretion of the editor's role as Queen of Hearts of the Fulmer Cup.

HEY I HAVE THIS THING THAT I THINK SHOULD COUNT. It doesn't. See the rules. If it doesn't apply, it will not be counted unless it perhaps involves a coach or the AD.

WHAT IS DOCUMENTATION: A court record, arrest record, or news article. Your cousin saw a linebacker chloroform a bus driver and then lead the police on a seven county chase? That's great! We'll need to see an article about it unless you are Al.com or a talking St. Petersburg Times. Stop talking to us, newspaper; you don't even have a mouth, and are not supposed to talk.

THE RULES FOR COUNTING POINTS. Changes have been made here.

CRIMES NOT INCLUDED. We'll make it up as we go, of course. This isn't serious, and never has been.

BONUS POINTS. Bonus points are awarded as seen fit for crimes with flair or obvious pointworthiness. We take the awarding of points to be a subjective affair, and will always treat it as thus This the QUEEN OF HEARTS RULE: we're in charge, and otherwise off with your heads.

REDUCTION OF CHARGES. We do NOT adjust for plea deals or reduction of charges. The reasons, again, focus on the things we can control and have the time to track. Much of the time charges are reduced due to the machinations of lawyers working their clients into pleas, and if we wanted to track lawyerin', we would have started a cup for lawyerin'. So unless the charges are flat dropped by the court, we stick with the initial charges filed.

WE CAN ONLY ASSESS POINTS BASED ON CHARGES. If it's not there, we can't make it up. And if it is there in triplicate, we can't help but charge for it. The huge margin of victory for Auburn last year came from Lee County prosecutors throwing the book at Auburn football players, with four or five felony charges given to each player. We can only use the materials presented, and are not the judge and jury.

I WOULD LIKE TO REPORT SOMETHING. Excellent. Send it to spencer at sbnation with a dot com ending on the address.

With that said, the Fulmer Cup season is open and running. Don't do your worst, citizens of college football, because based on what we've seen, that bad could be very, very bad indeed. As always, use SAS Wiki as a helpful resource for scoring, rules, and history. We do.