PEASE OFFICIAL, AND NOW BEGINS A HORRENDOUS HEADLINE COMPETITION. Boise OC Brent Pease has officially agreed to be the Florida Gators' offensive coordinator. This news was greeted with universal enthusiasm by his former pupils.

The file on Pease is all but a cut-and-paste from his Boise coaching profile, but let's consider the things we know will be true about the longtime assistant and alleged yeller-at-of-of-quarterbacks.

No, really, he was. BIRMINGHAM FIRE, STAND UP. 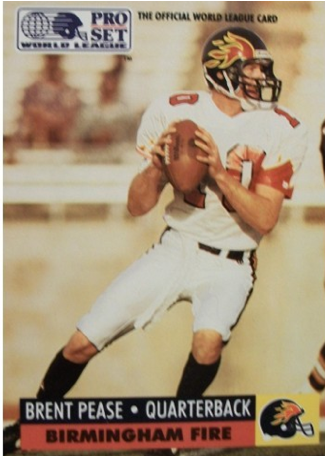 In summary: he's an improvement on Weis before he ever coaches a down, and if he's mediocre will be an improvement on what the Florida offense currently has. A muffled huzzah for all. (This is where we are: sixtieth in the nation would be AWESOME at this point.)

THE NOW SUDDENLY INEVITABLE PLAYOFF. Now that the plus one is apparently something Jim Delany is comfortable talking about, the actual questions of a playoff and its implications for college football may be something one should think about in a manner besides "MORE YES PLEASE." Bomani says if it doesn't equal something like greater equity for the players, then it's not worth it, while Blutarsky says a vote for a playoff is a vote for the bastards. (Like Michael Adams, for instance.)

MY THAT'S ORGANIZED. Bill C's preseason top 25 is the kind of thing that organized people like Bill already have ready to go, meaning we'll have one up sometime around Bastille Day. The overranking of Florida State, though? A delightful present to us.

SAL SUNSERI WILL EVENTUALLY GET HIRED SOMEWHERE. Considering the phrase "will eventually be hired" is currently the job description for the Tennessee defensive coordinator position, this seems like an ideal match. The frequently "almost hired" Sunseri was also rumored to be in the running for the Pitt job, so he may not even have to iron his suit as it should still be hanging on the rack.

A MISTAKE HE WILL NOT MAKE TWICE. Rich Rodriguez, not forgetting the defensive coordinator twice.

THE IOWA FOOTBALL PROGRAM JUST ENJOYS RUNNING A LOT. Running on first down, running in the red zone, sometimes running when maybe passing is a good idea, and then running running backs off the team. The long chronicle of attrition is a spectacular one, and that word is not used lightly because Iowa's running backs attrition. Not every NCAA athlete goes pro in sports.

He redshirted as a freshman, missed on his grades, went to North Iowa Community College to get back on track, and eventually played at two other community colleges before returning to Tampa and working at a hospital.

"Returning to Tampa" is rarely a good ending to any story.

THINGS YOU SHOULD PROBABLY READ ELSEWHERE. You make a Paris is Burning pun in a Moneyball kind of way, you win my heart forever. Damn, that's a huge, extremely edible fish. Read this, because it is awesome.