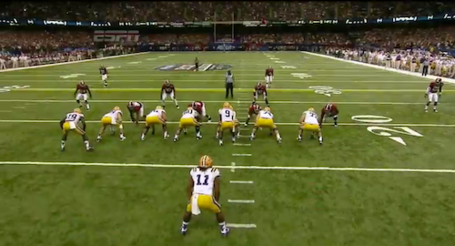 Perfection. Broadly speaking, we're discussing an unobtainable zenith; an envelope of flawlessness and utter completeness. The ancient Hebrew had a concept called 'tzadik', which often was used to describe righteous, holy figures and masters of spirituality. In order to obtain such classification, one had to essentially be perfectly perfect at their faith amidst great worldly obstacles that would otherwise render this impossible for most. Voltaire's "Zadig" derives its roots from a similar cognate and perhaps more aptly waxed philosophical on humanity as through destiny's lens, predetermination, and free will in general. Once, in a moment of sheer paragon, such a ne plus ultra finds its way into the sphere of college football. This is the result of such a black swan moment: 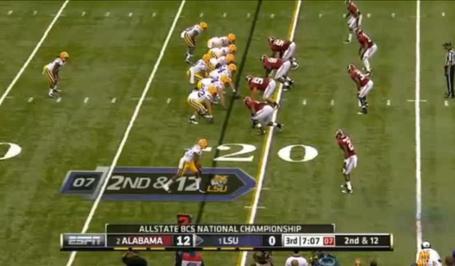 LSU lines up in an ace formation with a single set back from their own 18 yard line. It's second down and they have 12 yards to go to move the yard markers. There are two tight ends lined up on the left side of the formation, one off the line of scrimmage. Alabama counters with a customary 3-4 look. As per usual, Nick Saban avoids putting 8 in the box (especially logical given LSU's shortcomings through the first two quarters and change). Two linebackers wait in the middle of the formation, while one is likely marking a tight end, and the other is in a three-point stance. 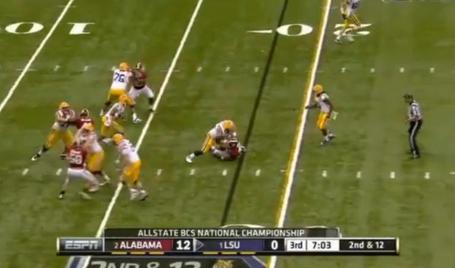 The ball is snapped. Chaos reigns. Linemen engage each other while Jordan Jefferson feels his world collapsing all around him. Again.
Jefferson checks off his receivers, but his mind is elsewhere. He wonders, if the universe is infinite, does that not mean it contains all possible outcomes and permutations of everything imaginable (and unimaginable)? Is there, at this same moment, on another world, a football game exactly like this one being played - except all the players have ice cream sandwiches for hands?
The quarterback makes the right decision and steps up into the pocket, where the defense is forced to adjust to the threat of his running ability. 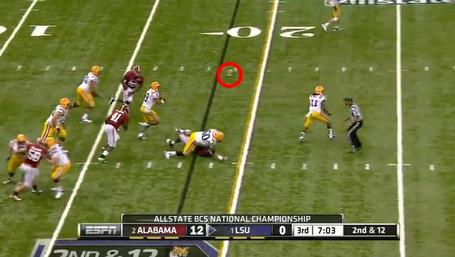 He looks directly ahead and sees his tailback's back eyeballing him as if to request, nay, demand the football.
Conflicting emotions seize Jefferson at this moment: should he trust this man he calls his teammate, or should he adhere to that innate suspiciousness we are all born with which keeps us alive in a world of stranger danger?
On the heels of a devastating pancake block and with his internal clock rapidly becoming more and more akin to a Skrillex anthem (CALL 911 NOW!!1! BZZZZZZZZZZ WUBB WUBB), Jefferson struts forward and sees but the back of Spencer Ware. He knows that if he just dig deeps and channels the spirit of the great New Orleans improvisers before him, he can will this first down into fruition.
"Strength," Jefferson decides. "This pass must have strength. More strength than a mere spiraling over-hand delivery can muster." A moment of stillness and then - then! - thousands of antagonistically paired striated tissue structures fire in Nature's most perfect harmony. 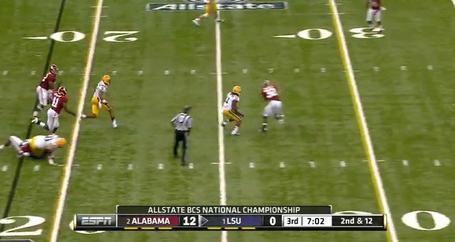 Some call it right place, right time. Others, perhaps more in key with the inner workings of the universe, call it fate's divine path coming to fruition before our very eyes. The beautifully violent, would be ill conceived wounded duck of a flip finds its way, almost as though it was perfectly designed to, into the waiting arms of Alabama defender, C.J. Mosely.
Now, time is moving faster, Ice Cream Sandwich Hands Planet be damned.
Like an advancing bishop forced to retreat to prevent the toppling of the king, Jefferson's role has changed. Moseley approaches. Three yards. Now two. Now one.
He shall not pass.
In a collision equal parts divine car wreck, equal parts brutal ballet, Mosely pays the messenger's toll. Sometimes the cost of being perfection's vehicle is a harsh reminder that you yourself are far from it. 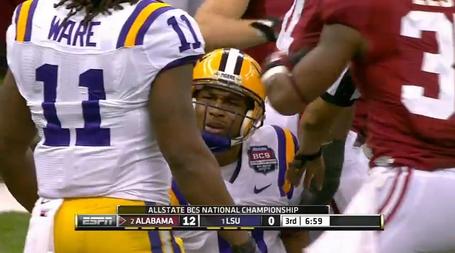 A whistle blows. The play is dead, and with it, perhaps, any hope of an LSU victory. Jefferson's expression betrays the unbearable truth of the moment - it could not have happened any other way.
One team's destiny all but sealed. Another's? Born like a phoenix from the ashes. At the ends of the ever swaying hands of fate, another celestial creation moment: a meme arises. Ashes to ashes, UMAD to UMAD.