LES MILES IS IN CHARGE DO NOT PANIC OKAY PANIC A LITTLE. 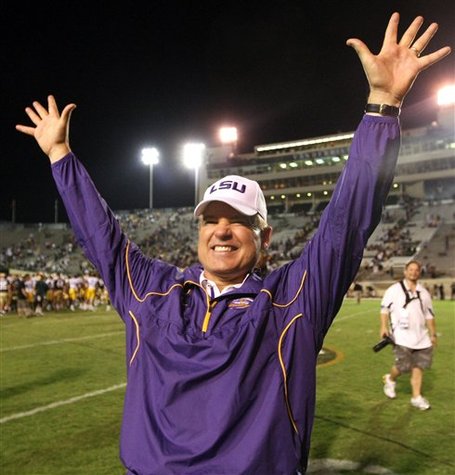 Les Miles has thoughts on expansion. Thoughts designed like H.H. Holmes murder-mansion, with hallways leading to nowhere, windowless subclauses, and a sinister basements where all meaning is incinerated and buried. REGARD:

"I think it would make great sense, great rationale if the SEC, the view A&M would give it, and the view of those schools in close proximity, obviously they would come back to Texas to play."

And in the third quarter of life, it's Les Miles a billionty, English language zero, but remember that Les Miles' dominance over the spoken word and language itself extends to other languages, too. (via)

OKAY FINE HERE ARE JUST A FEW MORE EXPANSION THINGS THEN REAL FOOTBALL. Xtranormal is now the voice with which the nation tells the truth. Matt Hayes says we're on the path to NFLhood, and that seems impossible as long as we don't have Joe Buck openly praying for death on the air. If we do, then this has come to fruition, and we will start writing about collegiate rugby for an impoverished living. (BTW, regional identity is still the primary identifier for each team in college football. Playing a tournament won't make SEC fans any less truculent, nor make Big Ten fans any less sullen and deprived of sunlight.)

WHILE WE ARE DISCUSSING BIG TEN FANS. Hey, Kristen Bell probably isn't a Purdue fan! Nothing lost, nothing gained, you know, since they don't exist.

TONIGHT THERE IS FOOTBALL YES YOU FORGOT THIS IS A SHORT WEEK AND WEDNESDAY WAS REALLY THURSDAY BUT YEAAAAAHHH FOOTBALL. Arizona and Oklahoma State will be sparring in the first genuine competitive Thursday night matchup of the year in terms of "this is one D-1 team playing another D-1 team, and not like UNLV/Wisconsin." This may be where the teams are most equal, since Arizona lost their entire offensive line and returns one starter on the defensive line, is missing superb wideout Juron Criner due to illness, and will play an Oklahoma State team that from early indications is exactly as lethal offensively as they were last year.

That said, this being Thursday night and all, expect Arizona to win by an extra point returned for two points. (Cowboys Ride for Free is already preparing for this with countermeasures.) If things get dark and you find yourself losing to Arizona, Cowboys fans, please remember that Mike Gundy's hair looked like this once, and take some comfort from that. 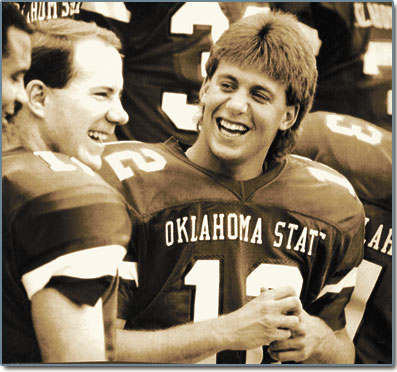 WE WOULD APPRECIATE A PULSE. Mark Richt, we do want you to get angry and throw something, because it would be very, very entertaining to us, and because the SEC's chummy coaching ranks could use a little more heel turn. (We say this now, but watch Will Muschamp and Derek Dooley become bitter tag team partners turned foes once they actually play, complete with pregame mike sessions.) Bobby Petrino is the Undertaker, btw, and needs smoke for his entrances and "Ain't No Grave" playing behind him. Nick Saban is Rey Mysterio, because he's short, you see.

AN ODD METAPHOR FOR AUBURN'S DEFENSE. Beakless, you say? Well, that's fitting this year, we suppose.