Joining us for Coach's Corner this week: Mutant League Football HOFer Ace Bricka, here to share his thoughts about the important challenges facing teams in key matchups this week. If you have never heard of the Mutant Football League, don't even read this. 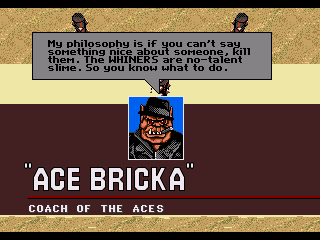 If my time as coach of the Galaxy Aces taught me anything, it's that you gotta adjust. You gotta be ready. Sometimes players get hurt. Sometimes they fall into lakes of fire. Sometimes they try to leave the team. That's when you have to accept change, or have those players killed by your henchmen. Torn to jerky, or fed manually through a document shredder? Bill Parcells always preferred the latter because it was less personal. He and I disagree on a lot, obviously.

They say time heals all wound, but you what wounds all heal? Football. Whether you blow someone up with a land mine, litter the field the ice, rock, or toxic waste, or call a nasty audible to inflict horrific casualties, the game's the game, even at 10,000 feet. Bribe a ref? Maybe. But at the end of the day, it isn't anything Vince Lombardi didn't do. I knew Vince. He ate a live raccoon he found in his garbage one morning in front of the whole team to inspire them. Lived eight years with rabies. All for victory. For football.

My first important matchup this week is the Miami Hurricanes. These guys got problems. Jacory Harris is back and that's a good thing because he's CONFIDENT. I wanna see less thinkin' and more drinkin'. My old quarterback Cirrhosis Jones used to say that. Lived up to his name. Buried him standing up because he wanted to keep dancing. Also because we were on the ice planet and all we had was a post-hole digger and he was all rictified. Swear the liquor made him stiffer.

Here's my plan for Jacory and success this week. 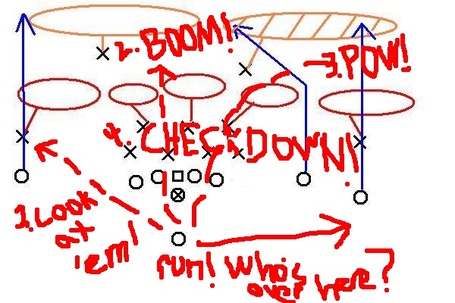 First, I want NO HESITATION. Remember how good he was his first year? I was in prison on Mars, so I don't. All I remember from that year was smoking formaldehyde-laced tampons just to stay sane. You might wonder what's legal on Mars? Fun, that's what. (Along with "pederasty," whatever that is. Haters.)

Jacory needs to FIRE THAT BALL directly into someone's hands. Don't massage a Cover 2. You're not a masseuse! I've said it in locker rooms for years. It's been said to me in dark hotel rooms. Sage advice either way. You first try to throw to the corner. Then you look for that post in the middle and THROW IT AS HARD AS YOU CAN. Don't ever look. It shows respect for your opponent. Your third read is to the sideline on the strong side. HIT THE CORNER IN STRIDE.

It helps if you run laterally a lot. Who's over there? You won't know until you look, silly. Get on over there and meet someone new.

Then you let that defense get on the field and win this game for us. Offense is for communards and chutney ferrets.

I've been on probation but I've never finished with her! Personally relevant statement there.

Auburn's defense needs some help. I coached defense in 19 Neptunian Speculum Bowls. You'll need to do this, Auburn, to get that defense in proper shape. 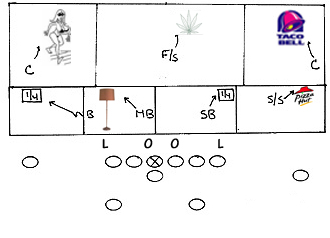 Very important here: the lampbacker. He just stands there. Every other player works off of the lampbacker in this coverage because when someone trips over him, the rest of the defense will swarm to the ball and hopefully tackle him. This makes it look like you're trying. That is the most important thing with this defense: look like you are trying.

Strongside Safety: They go get snacks. THEY MUST GO TO SEPARATE PLACES. Please note this diagram includes specific instructions. You need both food groups to make this work.

Hopefully the player will score. Then you collect on your heavy betting on the other team. We're here to coach winners in the game of life. Football is a means to an end in that battle, gentlemen. You may wonder what the extradition laws are on Jupiterian fraud charges. I, for one, am hoping they are lax and not recognized by your laws. Because that would be really great for ol' Coach Bricka in more than one way.

Coach Ace Bricka was co-defensive coordinator for the 2010 Michigan Wolverines and longtime coach of the Galaxy Aces of the Mutant Football League. He is not available for interviews especially if you work for the cops or one of his bloodsucking slut ex-wives.