WELCOME, SHEIKHS AND NOBLES OF QATAR. 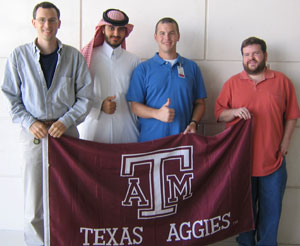 Like blind mole rats, we are, bound to the water dish, the food bowl, and bound within the bars of a cage we love for taking our freedom. Only a few can see, so we'll tell you what's really going on here, sheeple.

FACT: Texas A&M was formally invited to the SEC after a unanimous vote (which was allegedly not unanimous at one point.)

FACT: Texas A&M will now become a member of the most powerful sporting conference in the United States, or what will be the most powerful until Larry Scott guts the rest of the Pac-12, picks up Notre Dame, convinces BeiDa to start a football team in China,  and forms the SuperSex 27. Until then, though WOO MOST POWERFUL.

FACT: Texas A&M has a satellite campus in Qatar. You know, the people who bought the World Cup.

FACT: This is all a ploy to get A BOWL GAME IN QATAR, because Qatar's Crazy Guy fixation is in fact hosting every sporting event in one of the world's only humid desert wastelands.

This is so apparent to us, but vision can be a blessing and a curse. Ahlan wa sahlan, Pashas of the Mideast. Have a beer. No one's looking.

ONE LARGE BUT NO PUN INTENDED OKAY WE MEAN KEN STARR WHO IS AN ASS. Baylor is allegedly threatening legal action, and you go right ahead with that and your internet campaign. It is Baylor's only play (well, not their only play,) and our only logical response is to mock it. Surely, with his past history of not pursuing lengthy, fruitless litigation in the name of duty, Baylor President Ken Starr will back off this threat. (Especially since Dan Beebe, presumably typing on his Blackberry from a very comfortable tube on a children's playground where he spent the past two nights, has already said the Big 12 has waived legal action in this instance. He then enjoyed his breakfast of Steel Reserve.)

SERIOUSLY REVISIT THAT. There is no way Dan Beebe didn't sleep in a tube in a children's playground last night with a brown paper bag full of convenience store supplies. "Mommy mommy let's go over here OMG MOMMY IT'S DAN BEEBE OF THE BIG 12--" "I'M JUST TRYING TO SLEEP I'M NOT HURTING ANYONE." It's only fitting that he would embrace the Great Outdoors, since he is The Natural.

ACTUAL FOOTBALLiSH NEWS. Charlie Weis says that the whole playbook was not, in fact, trotted out for the Florida Atlantic game, but that they also called a few more than six plays. Kevin Wilson at Indiana has the solution: let's get closer to the student section! [/is pelted with seat cushions.] The odds on Wilson being the first coach this year to pull an Artest and dive into the stands have now risen to 5/2.

IT'S A GOOD DAY FOR IOWA FOOTBALL. Both on the air, and in the air.

STABBING IS PASSION, CONT'D. Say this for domestic violence involving football in Alabama: it is an equal opportunity recruiter, and goes both ways.

IN MORE RESPONSIBLE TEXAS FOOTBALLING: Rice's international students receive the gospel. Former Texas Tech coach Mike Leach has thoughts on football, and they are smarter than those you have.

BLOGPOLLIN'! The Blogpoll for this week is up. Les Miles is shooting a pistol into the ceiling cause they're ain't no one up there, now is there?

ETC: Falcor is looking adorable these days. Big Ghost Chronicles is on FIYAH right now. We like to imagine the entire new Mastodon album is about Burl Ives.