BETWEEN THE SYNAPSES: AN AUBURN FAN LEAVING THE UTAH STATE GAME EARLY

Share All sharing options for: BETWEEN THE SYNAPSES: AN AUBURN FAN LEAVING THE UTAH STATE GAME EARLY

Between The Synapses is a series in which we examine the innermost thoughts and feelings of varied inhabitants of the college football galaxy.  Today's subject: an Auburn fan* who elected to leave the Utah State game after the Aggies took a ten point lead with less than four minutes to play. 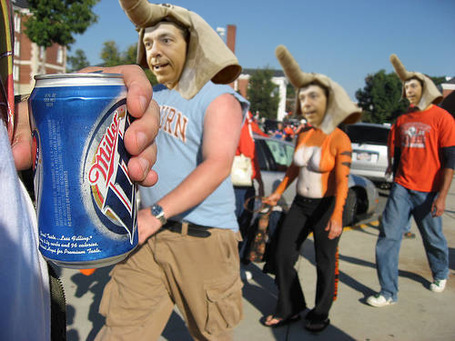 *Note: the picture above does not depict actual Auburn fans in attendance (or fleeing from) Saturday's game against Utah State.  We use this picture only to illustrate the species, and not to question the fidelity of any individuals, who most likely have reveled in many a field goal victory over FloridaAGGGGHTHEBURNING

I cannot claim any surprise at this turn of events; regression towards the mean necessarily predicts that an extreme value at one data point (in this case, an undefeated championship season) will be followed by a more standardized or "average" value at the following data point.  (Of course, it would be mere Gambler's Fallacy to conclude that there is any causal relationship at work here.)  Not even the most optimistic member of la famille d'Auburn would seriously believe that ours is a team not subject to the second law of thermodynamics. 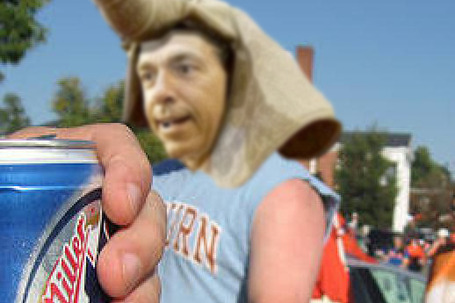 Put another way, every empire reaches a pinnacle, after which it has no choice but to begin a steady decay.  Surprisingly, this descent from the apogee may not even be readily visible; the team may continue to succeed in terms of wins and losses while actually becoming less proficient.  This is not unlike Lombard's paradox, in which two antagonists - the hamstrings and the quadriceps - manage to simultaneously contract.

Some will contend that I have made the wrong choice by leaving this game prior to the expiration of full time.  Of course, there are really no "right" or "wrong" choices, only an infinite variety of outcomes to which we arbitrarily assign a moral value.  Football is much the same; a touchdown is only worth more than a field goal because we all agree that it is.  Its worth is entirely a function of collective delusion.  Thus Sartre reminds us, "All human activities are equivalent and all are on the principle doomed to failure." 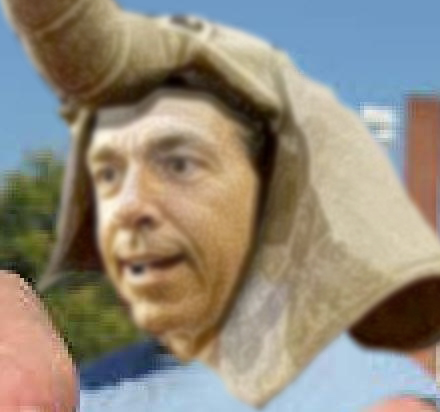 Neither pride nor shame (which laughably describe essentially the same set of physiological responses, such as increased heartbeat and dilation of the maxillofacial capillaries) seize me at this moment.  My absence from that painful congregation will not change the outcome of the contest any more than it can slow or hasten the heat death of the universe.

He turns on the radio and hears the announcers call Michael Dyer's game-winning score.

(tries to powerslide in his 1997 Toyota Tacoma)
(flips Tacoma)
(gets casts on both legs for six months, regrets nothing)

*This picture has been changed at the request of those in it. Roll Tide.