I CALL HIM GAMBLOR: WEEK 5

Share All sharing options for: I CALL HIM GAMBLOR: WEEK 5 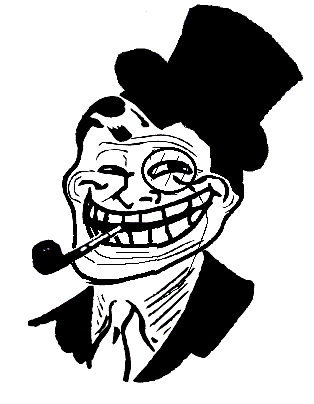 It has recently come to our attention that there are folks out there actually putting real people money dollars on some of these bets (and faux bets) that we continue to roll out week in, week out. This is both incredibly troubling though frankly, kind of amazing. If you've violated the sacred Ron P. approved WillyBuck-only pact you opted into when reading this in the first place, the onus obviously falls squarely on your shoulders. However if you're inexplicably profiting (perhaps even by simply betting against these), a tip of the chalace to you, sir (or madam). Fortune favors the bold and lord knows the boldest idiots in the world are the ones with the largest fortunes.

Retroscoring last week plays out something like the following: 3-5 in the "real bets" for the week, bringing the season total to 19-13. That's quasi-respectable I suppose, though of course, to totally superficially inflate things, we elect to factor in the gimmick wagers that superficially inflate that puppy to 35-13. IT FEELS GOOD TO BE SOMEBODY! /gets10thousanddollarsinones /donlife'd

June Jones, baby! Since benching Kyle Padron for former The Practice star J.J. McDermott, the Ponies have been doing big things (against admittedly really just terrible opposition). There's also that one alleged murderer/broadcaster though in their corner and that basically ensures that putting money on SMU is a crime-within-a-crime. Gary Patterson's baby Horned Frogs are but a shell of their 2010 Rose Bowl Champion selves, but the Vegas love is still giving them a half point shy of 2 TDs. If only it wasn't morally reprehensible for me to tell you to buy 5.0 points on SMU...

The bet within the bet: McDermott O/U 275 yards passing. Under. TCU's defense was shredded by Baylor but fool me twice logical fallacies rule everything around me, LFREAM. 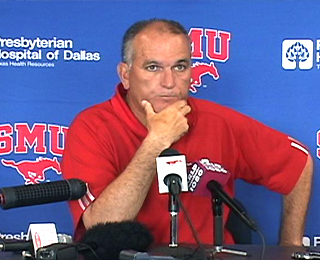 June Jones ponders existential quandaries are too much for our simple Earth brains to comprehend Y/N: Yes. Obviously. Look at that jowl.

Woah, nelly. Dadlfapsodifabo Sweeney and the Auburn 2010 of 2011 head to Blacksburg to take on Frank Beamer's charming band of development arrested teens who refuse to grow up [via Rufiowaves]. David Wilson looks to continue eating Chick Fil-A on Sundays, but first he'll have to defuse an inexplicably unbeaten Clemson side. At gut feeling, this one feels closer than 7, but Clemson is the least bet-able on team in America for obvious reasons.

The bet within a bet: David Wilson over under 130.5 yards. Over. Kevin SteeLOLe. 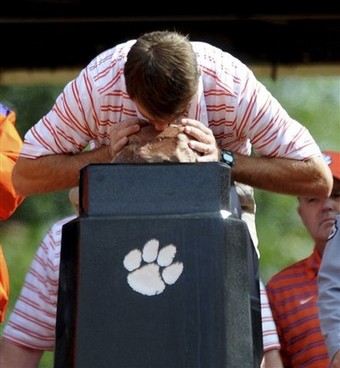 Bill Nebrasky's first foray into for four hundred lb ways of living will be as white, boring, vanilla, and unsexy as Sunday School in Altoona, PA. Taylor Martinez faces a real flesh and blood defense in the sort of game that will be decided on a FG or possibly on some kind of draw play. If you hate eye pleasing football, your doctor recommends you watch no more than 8 minutes of this one at a time then cover your face in a warm compress for 15 before proceeding.

Bet: Wisconsin -7. Bret Bielema's a married man, so this is really all he has left now. 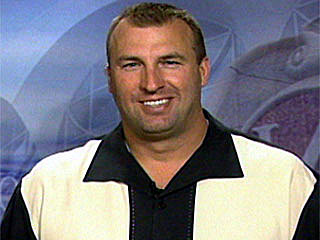 Florida is honestly just lucky the legendary Nick Saban worked in conjunction with league offices to schedule this one. I mean 2010 BCS Champion Alabama Crimson Tide? Florida coach Will Muschamp was just watching that one television from his house in Cedar Park, Texas. I mean, John Brantley is fine and all if you're trying to beat Vanderbilt but against Alabama? WOAH. Good luck, Gators! 9 out of 10 experts agree you'll need it!

Bet: Alabama −6. Saban may win 7-0. As one of the game's true living legends, once he gets that touchdown lead, why humiliate the opposition? He's such a humble man, that one. 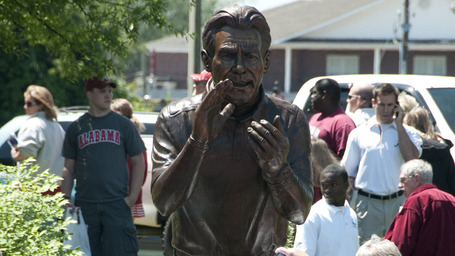