GONNA BE A GOOD ONE, Y'ALL. Like we said earlier this morning, it is just going to be an honor being on the same field as Nick Saban and the Alabama Crimson Tide. Here is Joe Paterno telling Nick Saban "You're the best coach I've ever seen. How do you ever lose a game?" Saban: "I have never lost a game ever." Paterno: "Wow. You really are good."  Saban: "I know. That is why Alabama hired me. They only demand the best in everything." 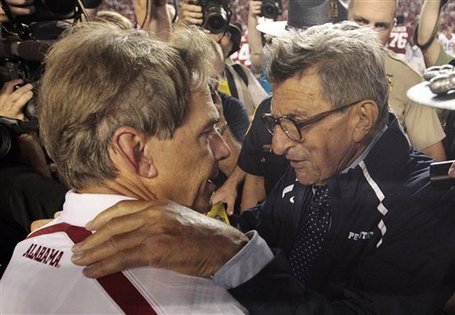 Will Muschamp understands this, and that is why he and Mr. Saban have said very nice things about each other this week. As for us, we just hope we can stay on the field with them for a quarter or two, because when you play Alabama it is like playing the ghosts of Bear Bryant and Wallace Wade and Freddie Kitchens all at once! Just being there is an honor, and we hope our boys realize that and pay proper respect.

HOLY SHIT YOU LET A BLIND AND LEGENDARY MAN RUN FOR TWO HUNDRED YARDS. When you allow a dead American music legend to decimate your defense, you do in fact need to type your entire summary without using the letter "d." Pitt Blathe happily highlights exactly how wrong they were about everything, while Cardiac Hill says that was...fun? Is that a word to associate with football? Yes? Fun it is.

DURN WORK. Case Keenum durn good last night, as our elementary school librarian might have said in between nips of gin from her "coffee" on the desk. Houston put up 266 yards of offense in the third quarter alone, proving that UTEP is where bats fly, brave men cry, and defenses go to die.

AND WE'RE ALREADY ALL VERY EXCITED ABOUT THIS IMPENDING CLUSTERFUCK. The 13 team schedule has people beaming. Quiet, you other person! Coach Mr. Saban is speaking!

"When you add a team like this, it kind of upsets the way of how you've scheduled in the future," Alabama's Nick Saban said. "We play Michigan next year in Dallas and certainly did that for a reason. We were not really looking for another opportunity to go back in Texas and play."

Clearly we need to undo the addition of Texas A&M immediately, because we have to think Mr. Coach Nick Saban cannot be wrong about this.

THAT COULD BE ONE WAY IT GOES. This could be an accurate summary, though the notion of facing a team that just got a serious deposit in the anger bank from Alabama should scare the living daylights out of the Aggies, because seriously Arkansas is now looking to whip someone's ass proper-like. Prepare accordingly the Ron Swanson way. Other previews: Chili and The Key Play talk VT/Clemson and the "Fuck Clemson" meme, Corn Nation covers the keys to beating Wisconsin, and Bucky's 5th Quarter just chats it up with Brent Musberger. (No, the real Musburger, guys.)

THIS IS ACTUALLY TRUE. The AD for Washington State, who was raised on a farm and still owns a ranch outside Spokane, is named Bill Moos. Country roots, indeed.

GRRR WE ARE MICHIGAN AND HATE THIS NEW THING. We tend to disagree with Michgan's crustiness most of the time, but really, one does not color out for the Minnesota game. It is simply not done.

AN ACTUAL LINK TO GRANTLAND THAT IS NOT TO CHRIS BROWN. Joel McHale details his time as a walk-on at U-Dub, and confirms your suspicion that crew is not just for douchebags, but is for IMMENSE douchebags.