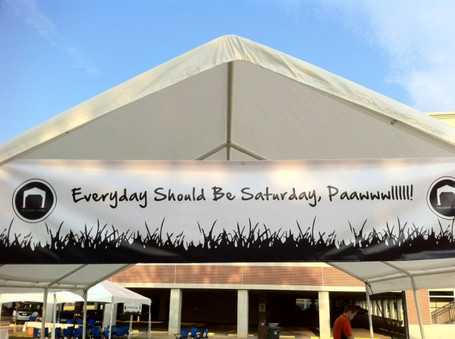 Welcome to the Noonday Shift. On deck: likely consumed after doing nothing to burn off breakfast; Appalachian State at Virginia Tech, where James Madison University scoffs and is like, "Shiiiiit, been there done that upstart bros,"; Northwestern and Boston College will play football, and then send each other Linkedin invites; Purdue losing to Middle Tennessee State;  and [tiny school with multiple names] faces off against [GIGANTIC SCHOOL WITH SINGLE MONIKER AND TWENTY TIMES THE BUDGET AND TALENT.] You might wonder which one will involve the most blood, and that would be Kent State/Alabama. Nick Saban is to his alma mater today as Owen Meany is to John Wheelwright's mother.

That tailgate banner belongs to the one and only Board Certified Scrotologist's tailgate on the plains. Flattery will get you everywhere, Auburn fans. (So will offering Kraken to those who ask for him by name.)