Share All sharing options for: SMOKING MAKES YOU BETTER AT WATCHING FOOTBALL 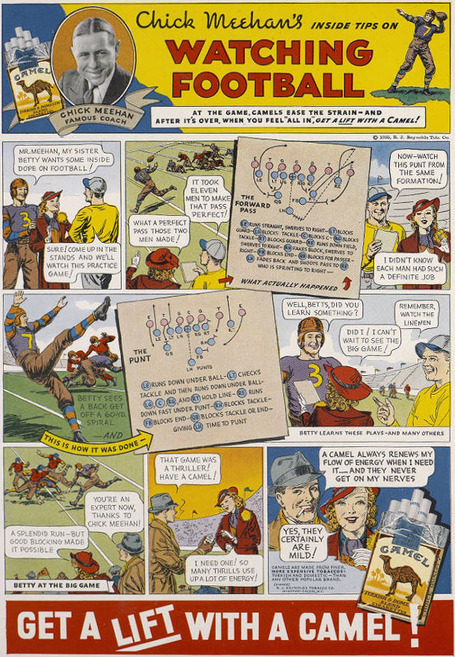 America used to be so much cooler when we were less afraid of cancer than we were of the Hun. A piece of Americana like this deserves a closer analysis, if only we can get a closer look at that energy-deficient dime piece in the Scarlet Pimpernel hat, Betty.

Coaches do endorsements for different reasons today: a summer home, perhaps a few extra bucks for the college funds and trustafarian establishments built for their grandchildren, or a last-ditch attempt to shore up the losses from investments in Ponzi schemes. We're sure that this being an ad from 1935, the "famous" Chick Meehan, a former coach at Syracuse and perennial power NYU, was selling his likeness to fund either tuberculosis and/or syphilis treatments at a local sanitarium.

This would explains Camel's other slogan from the era, "Camel! Only the delicious, robust taste of Camels is capable of dispelling the Ottoman Congestion from troubled lungs!" The ads featured Clark Gable stabbing a real Turkomen with a scimitar while smiling with a cigarette in hand. 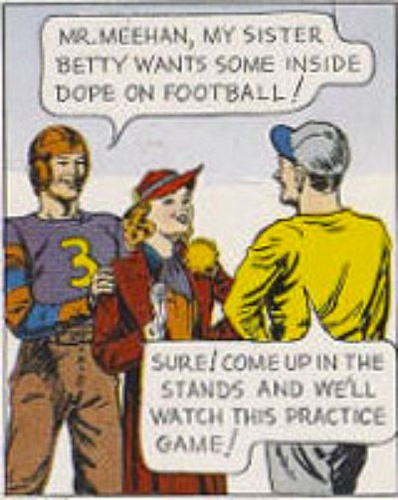 There is so much miscommunication going on here. Betty, in desperate need of an opium fix, has tragically ensnared herself into watching "football." Her derangement is apparent from the fluffy baby chicken she has nailed to her lapel, and the white gloves she wears to hide the injection sites on her hands.

"I didn't know each man had such a definite job." Well, now we know that Betty is an Ole Miss fan, and that Chick is going to have to teach her a LOT about how football actually works. That punting from the same formation note? It passes for pornography in the Lloyd Carr household. The one real takeaway from this: more coaches should run practice in high-waisted jockey pants and a yellow woolen, because that is a slammin' look, you tubercular legend, you.

"Betty, I want you to never, ever enjoy watching football, and thus tainting our fine mansome diversion with your perfumes, periods, and nattering questions. Watch the linemen: they are unattractive, never touch the ball, and will drive your opium-addled ass back to baseball, where the pace of the sluggish American pasttime will be all too compatible with your poppy-decimated think-rate. I hate your brother, and you, and always have." 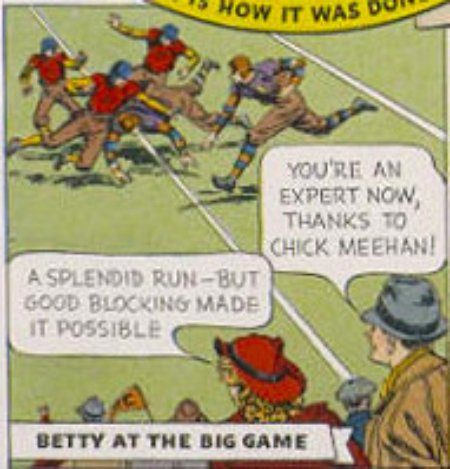 Yeah, great call Betty. Praise the blocking, and not the obvious mismatch of one nine-foot guy obliterating a cluster of figures who by scale appear to be toddlers. Betty will in a cut panel several minutes later inquire as to the role of the American Negro in this game, and everyone will just kind of shuffle nervously and tug on their fedoras without answering the question before offering her a soothing, segregation-concern-obliterating Camel. Betty will forget about it because Betty is like, totally the worst at staying focused.

Betty is now also an expert after one day with a coach, and thus is every football color announcer ever. "I talked with him yesterday, and my overly credulous belief in his acumen leads me to repeat it on air verbatim!" Betty will later give birth to a baby named Bob Davie late in life, and welcome him to the world by dropping him on his head constantly from the age of 0 to 9. 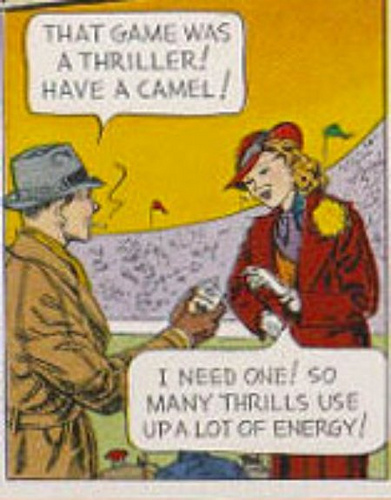 We have absolutely no problem with this frame unless Betty was watching a Big Ten football game, in which case this is factually inaccurate in the use of the word "thrills,"  but accurate in the heavy smoking, fedora-wearing, and resulting lassitude upon viewing. So yeah, this was totally a Big Ten game, and people in the 1930s thought anything that wasn't squalor, poverty, and the threat of hobos stealing your silverware and children was a "thrill." 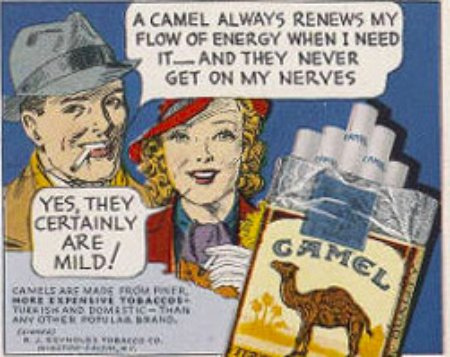 "Always mild, unlike our competitor Harshterburn's Lung-Rippers, the fiery throat-rapist of cigarettes described by coal miners as 'a cave-in in your lungs,' and by experienced sailors of the Orient as 'OH GOD WHYY YOU BASTARD NOW I AM DEAD." Chick Meehan smoked 'em, and he made it to 78, so maybe Chick was onto something here. (Betty, however, would die in a tragic phone booth-stuffing accident, but was so zonked on synthetic opium she didn't feel a thing.)