Share All sharing options for: MIKE SLIVE LETS MISSOURI IN ON THE SECRET RITES OF THE SEC

Gary Pinkel, Mizzou President Steve Owens, and Mike Slive assemble inside SEC headquarters in Birmingham. The setting is spartan: some chairs, a table, and a screen for Powerpoint presentations. The men are served coffee. They sit down and begin speaking. 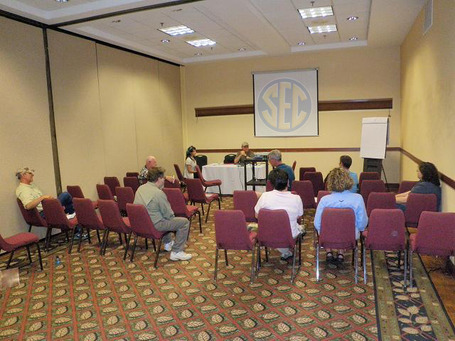 Mike Slive: Thank you for joining us today. As always, we appreciate your discretion.

Pinkel: I told someone.

Slive: Is he just one person?

Pinkel: No. I think he is many people but I run out of names sometimes so I just call them all "Joe Media."

Pinkel: I don't know much about things not football.

Owens: Now Mike, I do have a few questions about some clauses in this proposal. Can we go over those?

Owens: That states that as a condition of SEC membership, we have to accede to certain, and I quote..."established nostrums of conference rite and tradition."

Owens: What would be entailed by that, exactly?

Slive: Well, if you would see following subheader, those rites and traditions "are knowledge contingent on invitation in and acceptance thereinto the Southeastern Conference."

Owens: Yes, but we would like to know at least what we're agreeing to prior to admission. It seems only fair.

Slive: It would, wouldn't it, to the outsider at least?

Pinkel: Oh, hey Joe. How's your kids? You don't have any I'm sorry did you lose one? I'm in Birmingham, and--

Pinkel: I'm so sorry. Chase Daniel is saved under the same number, and I'd already answered, and sometimes he needs help finding places he delivers pizza in Columbia, and--

Pinkel: YOU HAVE THESE TOO?

Slive: We have one of these, too, President Smith. You may have met Les Miles. He, too, is a genius confused by the circumstances we assume as normal.

Owens: Thanks for your understanding. Now, could you confirm or deny some of these rites and traditions?

Slive: I'll let you suggest, and I'll just nod without saying anything that would violate any existing agreements, okay?

Owens: We're all required to get tattoos of Jared Lorenzen on the small of our backs. 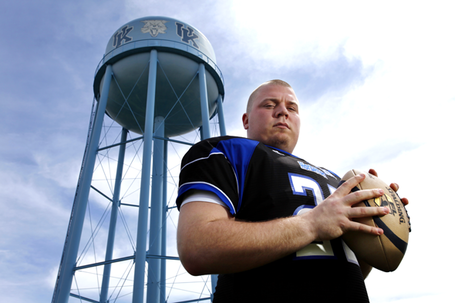 Pinkel: Oh that is totally gonna mess up my tramp stamp.

Owens: We have to send polaroids of our wives to Verne Lundquist on his birthday. Explicit ones.

Owens: Where the hell do I even get a polaroid camera anymore?

Slive: Certain CBS announcers are happy to mail these to strangers without ever asking why.

Owens: That we, as conference members, but write all interconference correspondence in Comic Sans.

Slive: There are some things we can only explain by saying "Roy Kramer was terrible at Microsoft Word."

Owens: At the beginning of every fall, you're required to snort a line of Bear Bryant's ashes.

Slive: [nods] Unfortunately Coach Miles became cripplingly addicted to them and we're long since out so instead you'll have to make due with this 40 year old calcified dirt the Bear once spit on.

Owens: Should Pat Dye show up on your doorstep pantsless and raving, we are to take him in?

Slive: A nine egg Western Omelet and two tumblers of Pimm's on ice have a reviving effect that is unparalleled in situations such as these.

Slive: Yes, and played for the love of the game and a scholarship alone after some scurrilous rumors unfortunately became a matter of public discussion.

Owens: When Gene Chizik appears in the post-game shower and remarks "Your skin sure looks rough, buddy," what is the appropriate reaction?

Slive: One should allow Coach Chizik to carefully exfoliate you. You will be in no danger. Mr. Trooper Taylor will softly exclaim "that's my dog right there" while gently waving his towel in the corner. The process is short, and not altogether unpleasant.

Slive: The women's world overall record holder in the deadlift, but does not publicize this fact due to image. Also, can count cards, and is banned from several large casinos.

Owens: All business is conducted on Bangkok time.

Slive: It is where Bear Bryant has lived since his retirement in 1983, and thus only makes sense.

Owens: Steve Spurrier is allowed trespassing rights to any and all properties in the state of Missouri.

Slive: Legally, he is treated as wildlife as long as he is holding a golf club in his hand. Any and all rights therein apply to him, including the right to hunt and trap him as you see fit. I warn you: he is wily, and not easy to capture.

Slive: A side project of the 1989 Simpsons' writing staff that escaped their control some time ago. He is played by acclaimed character actor Stanley Tucci.

Owens: All wood for construction projects must be purchased from YellaWood?

Slive: It is an exclusive contract. Their product, however, it strong because it is made of compressed and repurposed human bones obtained at steep discount from Chinese prisons.

Owens: One more, and one that fills me with a certain amount of very serious concern: at one point, we must hire Houston Dale Nutt as our coach.

Slive: I am willing to discuss this specifically. Coach Nutt, if you would please. 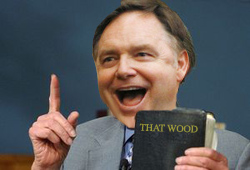 Owens: My god he smells like onions and old duffel bags.

HOUSTON DALE NUTT: YOU BET I DO

Pinkel: [whew] So, I was working on a way to add a new zonebreaking element to an option pass out of empty with a kind of shovel pass option built into the weak side, right? But how on earth do I do that if we're in a zone blitz situation? I mean, especially if we've got this big honking d-lineman sitting out there just waiting to obliterate my guy? Because seriously, if the qb can run, why not, but with all the zone-dog looks we've been seeing I'm wondering if this is even a constraint play, per se, or whether we're taking too much of a chance on an interception on the shovel, you know? And do i built a vert look in behind it just to draw defenders off, or put the zone defenders in a bind with an in? There's just looks on looks on looks to this, but I don't want to overthink it, you know, right?

LOOK AT THIS FREE FOOTBALL DIAGRAM I HAVE READY JUST FOR THE GIGGITAKIN'! IT HAS ALWAYS WORKED FOR ME!

Slive: We're going to need you to hire him immediately. Don' ask why, but as a part of his last contract Jimmy Sexton somehow wrote into our bylaws that he can only be fired by a conference member if he is immediately hired by another conference member. As our newest member, you are the first option.

Slive: Pinkel will be hired by Ole Miss in turn.

Pinkel: Well...do they have recruits in Ole Miss?

Slive: I'm sorry, but recruiting is not done at Ole Miss. Locals consider it distasteful.

Pinkel: Who plays for them, then?

Slive: That is another secret: Ole Miss is in fact an AFL2 team without a home, and has been since 2007.

Owens: I don't even know what to say.

Slive: Oh, just wait. We haven't even gotten to the initiation ceremonies yet.

Nick Saban enters the room with a blowtorch and a stencil of the Golden Flake logo. The strikes the igniter, and lowers his welding mask.

Saban: I will not lie. The initial pain is excruciating. The scabbing is horrific. The benefits exceed your wildest imagination however.

Slive exposes his side. On it: a pink, fleshy scar that reads "GOLDEN FLAKE" in clear lettering.

Slive: It only hurts once, Missouri.

Owens: Well, it does beat being a conference with Texas, I suppose.