NICK SABAN BY THE NUMBERS

Share All sharing options for: NICK SABAN BY THE NUMBERS 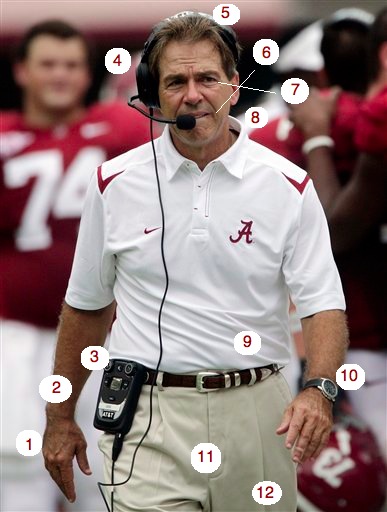 1. UNNATURALLY LARGE HANDS. If you've seen them in person when he gestures, Saban's hands look like fleshy tennis rackets. They serve a number of purposes: slapping interns for breathing too loudly, palming SEC title trophies with ease, and for wooing the mothers of recruits with a wink, a nod, and if necessary a brief whinny in their direction. Capable of palming a basketball or the severed head of Gerry DiNardo.

2. FINE CORINTHIAN LEATHER. To head off skin cancer, Saban had his entire hide replaced with rich Corinthian cowhide in the summer of 1994. He has a coat of leather soap applied twice daily by Alabamian virgins, or at least by comely lasses who take the dip out of their mouth before getting down to business. (Always the second, never the first.)

3. FULL SPECTRUM LIFE SUPPORT DEVICE. Powered by a tiny fusion reactor, Saban's life support system condenses fluids for hydration from the air and recycles sweat, filters the blood, and administers nutrients intravenously through a photosynthetic calorie generator located on the device. Also plays "Horse With No Name" and other hits of America by voice command.

4. HEADSET. Capable of beaming instruction directly into the minds of assistant coaches with compatible brain implants. Still occasionally broadcasts a quiet, cold-blooded "pussy" to the brain of Major Applewhite at 3 a.m. on random evenings.

5. HAIR. Blown straight back by jet engine Saban uses as blow-dryer and exfoliator each morning. Made of fireproof polycarbonate fibers, it is resistant to rain, hail, snow, sunlight, fire, is bulletproof, and also completely impervious to NCAA sanctions or investigations.

6. TEETH. Two implanted molars. One contains a cyanide capsule, per Bill Belichick's orders. The other is one of Bear Bryant's, implanted as part of the conditions of taking the job. (Mike Shula was fired after he accidentally dislodged and swallowed his.)

7. EYES. Capable of being disappointed in you from up to hundreds of miles away, son.

10. WATCH. Strictly for ornamentation, as an LED display projects the current universal time on his eyeball at all times.

11. URETHRA. Cathetered like all Belichick disciples, and in place without malfunction since 1991.

12. DEEP PLEATS. Allow for Saban to harness the power of the wind, netting a handy average of $140.83 in green profits for the Alabama each month. Never stop hustling.