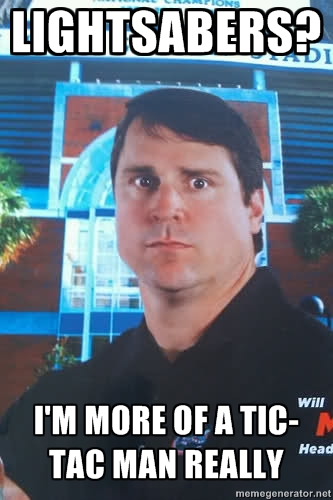 THE QUEST FOR NINE CONTINUES. The quest for nine points gets several key allies back this week as Jordan Reed and Andre Debose will both be back for Florida for the Alabama game. This addition to the depth chart means Florida stands an even better choice of continuing their progression against Alabama by scoring nine points in our game on Saturday. THE QUEST FOR NINE: THIS TIME IT'S NUEVE. This Saturday at 8:00 p.m., only on CBS!

I WANT TO LOVE YOU (P.R.T.) Godfrey is still fascinated by the tiny personal trams at West Virginia.

MMMM THE NUMERICAL. Due to the road trip we reversed the order this week, so Bill goes first with informative numbers whose very unexplained existence make you smarter.The Numerical, Week 4: Collapses, Field Position And Games Of Keep-Away - SBNation.com Read why they're important and you'll be super good at things.

WELL THAT'S UNDERSTANDABLE SINCE THEY ARE AN ENTERTAINMENT NETWORK FIRST. ESPN not divulging its own role in conference realignment? Well, no, they wouldn't., would they?


WE SWEAR THIS ISN'T THAT SURPRISING. Go back and look at the numbers, and Jarrett Lee's emergence as a reliable, non-Jarrett Lee-ish QB in LSU's offense isn't totally surprising, especially considering his primary competition is named "Jordan Jefferson."