NO THAT IS ABOUT RIGHT. 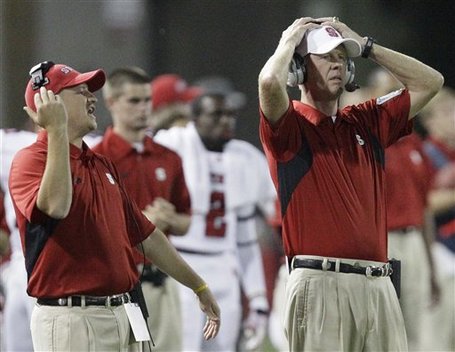 N.C. State had two defensive tackles "banged up" last night, and thus will play the remainder of the season in the daring 2-7-2 alignment. NC State's bad for a reason, but holy hell -26 yards rushing against Cincinnati is the new poop standard for FBS team versus FBS team performance for this very young season. At one point in his postgame interview a single wrinkle appeared in his red NC State polo. This is the most emotional moment in Tom O'Brien's entire life.

Cincy's pretty happy with the whole thing, even if Zach Collaros' underthrown interception in the second quarter made us wonder if he'd had a retina dislodged on a hard hit, destroying all depth perception in the process. PS: Jenn Brown is in your locker room looking at you naked! And saying bitch on national TV, and then owning up to it. This sort of makes us like you, Jenn Brown.

WE THINK DAN WETZEL SHOULD OPEN A JOINT BANKING ACCOUNT WITH US. Then we'll see if he can understand why the notion of splitting checks with someone else doesn't illustrate why the Big Ten and the Pac-12 continue to oppose a college football playoff. Oh, Dan? We cleaned that shit out in one night on strip clubs and fireworks. Lots and lots of fireworks. In additional news, we also burned down our house, which was your house until we signed this contract to make it "our" house. Does this get the point across, or do we have to destroy more of Dan Wetzel's imaginary things to make it clear?

MMM MORE BIG 12 PUTTING "FUN" INTO DYSFUNCTION. For greater clarification of what actually happened in the Big 12's chaotic teleconference last night, Staples has a good roundup. At one point reality became metaphor when everyone was talking over each other on the same lines due to interference. This is the Big 12 conference, and this therefore makes total sense. Fake Dan Beebe went out big, though, and that makes all of this so very worth it.

TEXAS A&M, YOU ARE NEVER WINNING A TITLE IN THE SEC, NOT EVEN ONCE, AND AT LEAST 80% OF YOUR STUDENT BODY IS WEIRD.

I MEAN TEXAS A&M STUDENTS ARE THE KIND OF WEIRD WHERE YOU DON'T LEAVE THEM IN THE SAME ROOM AS HOUSE PETS UNATTENDED.

Future Big 12 Commish Chuck Neinas is that pile of dust on the floor over there with a swastika pin, and we're not saying that because he's a Nazi sympathizer trying to find the Holy Grail, but also because we're totally saying Chuck Neinas is just Dan Beebe plus an aging spell. Did you know that anyone who ever got a job in the Big 12 ever got their job because Chuck Neinas suggested them?

/gets AD job with Big 12 school 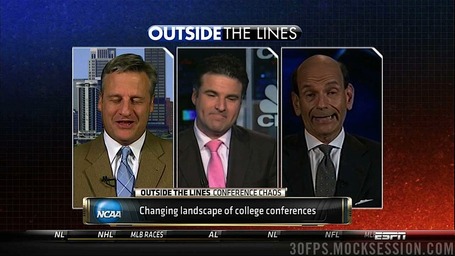 We think Forde's willing himself to explode. Not even blaming him.

1,014-425. That is the combined score of all games during Florida's 26 year win streak over Kentucky that began in 1986. Despite the prospects of likely continuing that streak this weekend, Charlie Weis is miserable, and we like him when he's miserable. (Not miserable like Kentucky's offense, but you know, as miserable as a fat dude in the Gainesville heat, which is FUCKING MISERABLE.) Kentucky has a new dance, btw, and you might want to learn it! Never!

WHEN WILL THE NCAA WAKE UP?  You know this is fiction, because they never investigate the truly suspicious things, even when Shirley MacLaine runs for almost a hundred yards on them.

ETC. Via Kleph, the look on the waiter's face says all here. New tattoo says THIS. THAS RACISSS. Paging the Pony Express.