WELCOME TO THE FIRST FACTOR FIVE FIVE FACTOR PREVIEW of the 2011 season.Why did we wait until week four of the season to do the exorbitant, completely irrational Thursday night game, you ask? Never go hard without warming up, dear reader. Did Goodfellas open with the magnificent uninterrupted tracking shot at the Copa? Did Anna Karenina just introduce you to Count Vronsky on page one? Of course not. You save the masterpieces for a time when the viewer is warmed up.

(Also, we forgot about them LOL ha sorry.) 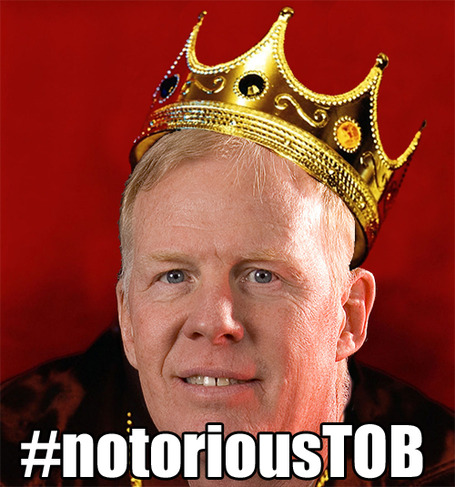 (Image via THE KEY PLAY who is ALL CAPS ALL THE TIME IN FOOTBALL SEASON.)

Nebulous Statistical Comparisons of Dubious Validity. Okay, there is one side of the equation Cincinnati has fixed, and it is the offense. Even in their 45-23 loss to Tennessee they accumulated over 400 yards of offense and a hearty 156 on the ground from Big East luminary and elementary school pseudonym Isaiah Pead. Wake Forest rushed for 336 on the Wolfpack. Their linebackers are all dead, and are being played by local improv actors. None of this is very good for NC State.

NC STATE C-C-C-COMBO BLOCKER: Mike Glennon has been more than serviceable at quarterback, and Cincy still can't defend a pass (93rd in the nation.) It is conceivable that you could complete an Aussie rules punch pass against this secondary. (Take notes, Louisville. If Will Stein is hurt, this might be a good backup plan for Teddy Bridgewater.)

Mascot. NC State starts with the inherent disadvantage of having a plural noun as their name, a conundrum they've solved by making their mascot a couple, Mr. and Mrs. Wuf. The prospect of a married pair of mascots is kind of depressing. We like our mascots out getting some strange on the road, man. The Oregon Duck? Foot fetishist, mostly because his are webbed and regular toes are just, you know, freaky. Otto the Orange? Autoerotic asphyxiation, an irony because he doesn't have a neck and will never admit it. Mike the Tiger? Jesus, you don't even want to know, but there are pictures of it, and we have seen them, and it was either the most beautiful thing we've ever seen or the most repellent. Typical Louisiana, in other words.

The Cincy Mascot, the Bearcat, may be the most Ohio mascot of all. He has a pedostache. He wears a jersey despite being fully grown. Frankly, we think he's high most of the time. (LOOK AT THE EYES.) He probably says "warsh," sees nothing wrong with adding a superfluous carbohydrate to extra meal, takes a suitcase of Busch Light to a formal BYOB Christmas party, and probably listens to some music that would kill half the staff at Pitchfork upon prolonged exposure. That last one is an especially redeeming feature of his persona.

Oh, and most Ohio of all: he's been arrested. 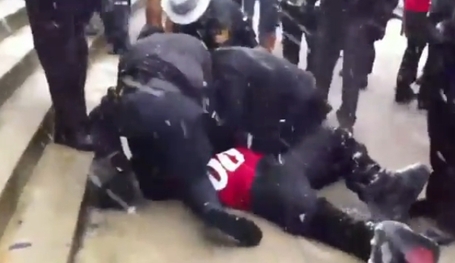 Aura: Nippert Stadium punches above its 35,000 or so in terms of stadium noise, but aura doesn't quite apply here. A light misting of atmosphere? A drizzle of charisma? The teams played in a 30-19 NC State shed-singer last year, and by that term we mean not quite a barn, and not quite a full conflagration of football chaos. Speaking of sheds, Craig James is calling this game, and should not be working for ESPN because he used his position to lie and get a coach fired. He is also conducting a de facto political campaign while still employed by the network. The most dominating note beaming through your screen tonight may be that of rank asshole, and that is no one's fault but the Worldwide Leader. #FREERECE 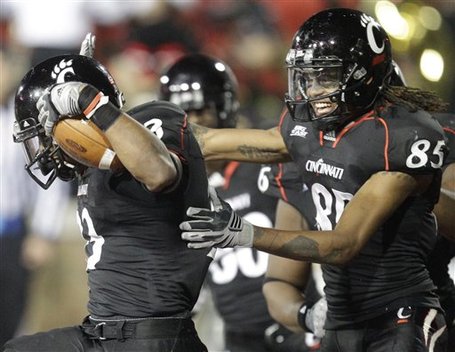 Rickey Dowdy. "Dickey Rowdy" would be such a better name.

Tomaz Hilton. Alias of Sterling Archer if we've ever heard one.

Munchie Legaux. THE ONE AND ONLY MUNCHIE LEGAUX.

Grudges/Scores To Settle/Sheer Cussedness? The "Freshly asskicked" rule applies to NC State, who just lost to Wake Forest, a sin of negligence not as bad as it would have been ten years ago, mind you, but certainly not as excusable as it would have been five years ago, nahmean son? Cincinnati may have a nasty advantage here: a team capable of dropping a lot of points at once on someone who has very little ability to prevent a team from running on them, and thus play-action passing on them, and then putting the fate of the other team in the hands of a coach all too happy to not play like the Notorious TOB.

There is a book we read to Magnus every night called "Trucks." We'd love to write one of these books one day, because you can tell the writer really agonized over the rhythm, the exact pacing. "Trucks...they go through the tunnel? Is that iambic ENOUGH?" We know they sit there, waiting for someone to send a letter complimenting their deft handling of cadence, and not the usual mailing envelopes filled with glitter and crayon portraits of trucks with slobber marks on the edge.

Well, it is time for that compliment, children's book writer. At one point, a picture depicts a moving truck, and the line is:

Here is a truck [page break] bringing the furniture.

Here is a truck [page break and deep inhale into wrestling announcer voice] BRINGING THE FURNITUUUURRRRE!!!!

Cincy brings the furniture tonight, and drops it squarely on the crown of Tom O'Brien's head.

EDSBS FACTOR FIVE FIVE FACTOR PREVIEW SUMMARY: 5-0, CINCINNATI.  Historically, the Factor Five has been horrible at predicting anything, but since this is the first one of the season we will proudly claim an undefeated record for 2011. 0-0 for 2011, and as trustworthy with your wagering dollars as a Roma barge captain with disassociative disorder.