GET EIGHT WINS/ MAKE YA THIRSTAY. Oh shit it's the Notorious T.O.B.-- 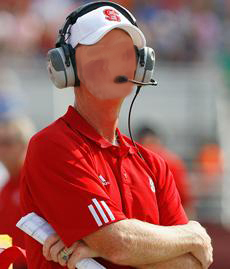 There is actual football tonight, and it takes place between Cincinnati and NC State, and that means the #notoriousTOB tag is worth your viewing on Twitter. Our personal favorite thus far:

Backing the Pack and Down the Drive did a back and forth on the game, and neither of them sound like they have any clue what's going to happen tonight either. It is in Nippert, an underrated scene, and Craig James is calling it in a river town, so you know what that means. #dragtheriver #becausehedroppedhiswalletinit #sillygoose

THE BIG 12 NO LONGER #BEEBELIEVES. Dan Beebe is out as head of the Big 12, and in comes sketch-ass headhunter and consultant Chuck Neinas, who will surely fix the problems of the Big 12 by identifying the solution to its problems as further catering to Texas, abandoning ship as soon as things get difficult, and then becoming head of the Longhorn Network's programming division or a consultant to it. Seriously, this is exactly what is going to happen, and we cannot even be mad at you, Chuck. That's turning thin air into silk ties and private jet rides, and is a talent.

JUSTIN HUNTER'S INJURY LOOKED BAD IN THE SHORT TERM AND ALSO YEAH IN THE LONG TERM. Bill's Morning Update says Justin Hunter's loss turns Tennessee into an offense dependent on a possession receiver, and that is so very much not good for Tennessee's long-term prospects in a very qualitative and quantitative way.

BOISE IS CREATIVE. Just look at what corn can do for your fandom.

RUTGERS' INVISIBLE ARMY DOMINATES NYC. Because Rutgers fans are both invisible, and everywhere.