SEC EXPANSION: BUT WOULD YOU SHOOT A SIBLING IN THE NAME OF OUR BRAND?

Share All sharing options for: SEC EXPANSION: BUT WOULD YOU SHOOT A SIBLING IN THE NAME OF OUR BRAND? 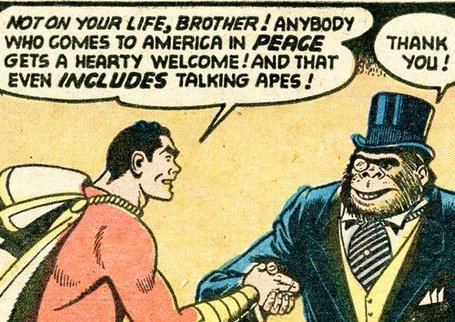 We know realignment is the worst. It is this awful game of prospecting, data-crunching, and sports business reporting dropped into the middle of your season.  Alabama plays Arkansas this week in the game where, for the third year in a row, we vaguely hope for someone to move the ball on Alabama without the benefit of an injury. Oklahoma State plays Texas A&M at Kyle Field in what will be a zillion points and thousands of swaying psychopathic young people stacked three decks deep. Florida State goes to play our new combo-breaker and linguistic marvel Dabo Swinney at Death Valley. LSU goes to West Virginia for a night game. Lunacy will be the norm this weekend, and we're all in obstructed view seats because of realignment just slapping girders in our field of vision.

The SEC has invited Missouri to be its 14th member according to Matt Hayes of the Sporting News. That's fine: Missouri is at least geographically contingent, has a solid football program, and according to our sources has fans fond of demanding an offensive coordinator's firing in the stands. That kind of hatred and irrationality is a calling card of the SEC, and thus seems compatible on one important level.

The SEC also seems content with staying at 14 teams, a move that passes for discretion now, but on that issue of branding: we cannot overestimate how important the notion of identity and intensity is for a sports league. You can say that West Virginia, for instance, lacks academics, even if it's in the neighborhood with some existing conference members in terms of academic rankings. You can justifiably cite television market numbers, and population studies, and yes, even the dreaded brand recognition surveys regarding their spread.

You can also suggest something equally important to a conference's succes: that West Virginia, like many existing conference members, has a value that can't be quantified in households and eyeballs in a particular geographical area. Michael leans heavily on the parallel of the EPL there, and with reason. Despite fielding teams from some places that could easily be called the Oxford or Lexingtons of England, the EPL thrives off televising a product that people most of all want to watch because it is the EPL, and is therefore guaranteed by brand to be more colorful and more entertaining than its competitors.

The Big Ten, SEC, and EPL all thrive off this brand durability. Texas A&M does nothing to water down the lunatic devotion that is part of the SEC's appeal, but if the 14th team is Missouri, then we only have one question: when you think of MIssouri football, do you think of burning couches, and insane devotion, and of cameras panning a sea of bourbon fumes and howling hoi-polloi while an announcer lets the roar do the talking for them?  Despite the tv eyeballs, are any of them watching with a gun in their hands, ready to shoot the tv if the defensive coordinator they want fired so desperately appears on the screen, and thus makes them shoot the thang for its tarnated insolence?

We are being deliberately cartoonish, but that is the one thing we in all seriousness do not know about Missouri: if they fit the brand on a sentimental level, and would indeed at their worst lengths poison trees to seek vengeance on a rival. This sounds unimportant, but it's not tax breaks that make Texans so Texan; it's the concept of the Alamo, and boots, and a fondness for brisket over pork, son. Old Trafford makes Manchester United to the eyes of a kid watching in Singapore, just as the Swamp's beaming orange walls and glaring heat make it so hellish even when viewed by a spectator watching it half a continent away.

We know West Virginia had this, at least. They would go to all of these extremes including tree poisoning and beyond in the name of amor sportis, and would then quite possibly set that rivalry tree on fire just to finish the job. As nice a chunk of puzzle piece as Missouri is, there's one side of the West Virginia puzzle that fits so well here, other sides and shapes be damned. Thus some sadness at their exclusion, and a mournful playing of "Country Roads" while standing next to the embers of some woeful and incinerated couch made of dreams and all-too-flammable artificial fibers.

ps. And these are just polite dismissals in order not to be seen as the jackal here.