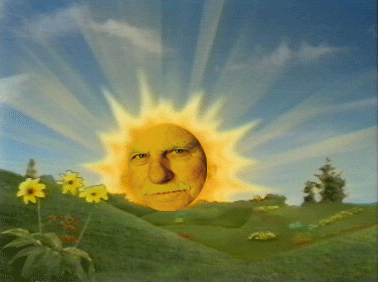 With the lynchpins of UConn to the north and FIU to the south, our only certainty is glory, and our only currency is victory. JOIN THE SUNBEAST NOW. As silly as this sounds, the Mountain West and Conference-USA are considering a merger, and the SUNBEAST is a far better name than the only moniker we've made for this portmanteau of a conference.*

THERE MIGHT BE A SLIGHT REPRESENTATION OF URBAN AREAS HERE. Nate Silver's piece overrelies on urban areas, which are way overrepresented in his survey of college football numbers. Also, there is no fucking way Boston College has more fans than Florida State, but there is certainly a possibility that Florida State fans aren't as keen on filing out online surveys that don't end with a free carton of unfiltered Marlboros.

WEST VIRGINIA IS STILL ALIVE. In case a Cincy blog's hatin'-ass reports of their rejection from the SEC got to you last night.

SOUTH CAROLINA TOURISM SAYS PRICES OF $14.99 A NIGHT FOR HOTELS IN COLUMBIA MAY NOT BE USUAL OR NORMAL. The NCAA now agrees with this assessment formally.

IF YOU MISSED ANYTHING: Bill has all the pods of the possible Pac-16 and Pac-14s filled out for you, and it is so very futuristic for Larry Scott to build a superconference with "pods." The Pac-16 is our 1980s elementary school! Please say there will be filmstrips and juice. Anchor of Gold has additional superconference mapping updated with statuses, and my that's a lot of cluelessness in the middle of the country. <----SHHHHHHH YOU FLYOVER COUNTRY SNOBS

LET ME INTERRUPT YOU THERE. I'm going to set you up for a question and then cut your knees off halfway through, because I have mastered the art of dick interviewing. But yeah, of course the Sugar Bowl was bribing people, or as they call it in Louisiana, "doing business."

IT'S LIKE HARD KNOCKS, BUT WITH NO BUDGET AND WITHOUT REX RYAN IMPLORING YOU TO HAVE A SNACK. The Portsmouth Destroyers are all too happy to show you what a real football team looks like, Dallas Cowboys.

ETC. Michael Boley's just living festively, that's all. Steve Spurrier doesn't know shit about Kentucky football, and that is probably improving his quality of life. Maggie Smith sucks at using swivel chairs. Hockey is a sport played on ice that involves speed and violence, and those elements vary from player to player. Copperheads are now joining zombies and Kat Williams on PCP as nuisances of the ATL. Germans are capable of happiness, and it doesn't always have to involve invading another country out of boredom.