THE ALPHABETICAL, WEEK THREE, AND SOME BONUS LETTERS JUST FOR YOU

Share All sharing options for: THE ALPHABETICAL, WEEK THREE, AND SOME BONUS LETTERS JUST FOR YOU 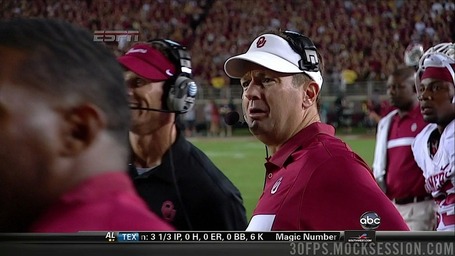 Alpha: The alphabetical is up, and wonders where football is hurting you this week. Not that it's coming close to hurting us: Auburn, Tennessee, and Florida State lost on the same day, and for that we bend a knee, kiss the good earth, and thank you for the rich harvest of other's delicious misery on Saturday, Crazy Old Testament God. We know the 14-13 loss to Auburn is coming, and accept this ahead of time.

Beta: That predicted Auburn/Florida final will be 13-11 late, with Auburn getting those points off three field goals and a safety, and Florida getting them off a kick return and 63 yard field goal. Our nightmares are VERY specific.

Gamma: We allude to just how awful the Temple/Penn State game was, but really it was the meanest trick of all by ESPN to slide it into your eyeballs right after Gameday. it was the most abrupt and evil of transitions: Ooooh, look, Corso picked against the Noles! And I'm just gonna watch some football, and look, there's this game on, and you bastards. Now we're watching Temple/Penn State HOW DID YOU DO THAT YOU SONS OF BITCHES.

Delta: And of course, no matter how horrible it was, you had to know what was happening, and that's why you know that Penn State took four stabs from the one foot line to batter home the winning TD, and even then you expected them to fumble the snap and give Temple the ball, which would then result in a fumble in the endzone for the Owls, and then a Penn State victory anyway. All according to the Addazio plan, of course.

Epsilon: Nor did we mention in the Alphabetical the massive Cristoboner you should have for the Sun Belt's finest, FIU, who beat UCF and professional Asshole George O'Leary* on Saturday.

Zeta: Chris Rainey was just out of his head on Saturday, and that's great because otherwise we looked like a Charlie Weis starter kit on offense, and threw humorously faithful passes to Deonte Thompson in the redzone expecting him to do thing with them other than cockfinger them away.

Eta: Steele Jantz is proof that Iowa State should always have a scrambling, sort of bullshitty spread qb capable of just taking any amount of "grit" you care to hang on him. This quarterback shall also have an obviously insane name, like "Seneca Wallace," or "Steele Jantz."

Iota: Vandy ran Statue against Ole Miss, and it worked quite well.

Lambda: The Tennessee/Florida game on Saturday was so horrendously officiated we're shocked it wasn't the first to bring back a score on an unsportsmanlike call. The negligence was fair, at least: both teams received random PI calls and had numerous false starts ignored by officials. Xavier Nixon got away with at least three false starts officials didn't call, and while that's fine with us, the game is one for the SEC crew reviewing it to burn and never ever revisit.