HOW IS YOUR TEAM THE ANSWER IS BETTER THAN MEMPHIS

Share All sharing options for: HOW IS YOUR TEAM THE ANSWER IS BETTER THAN MEMPHIS 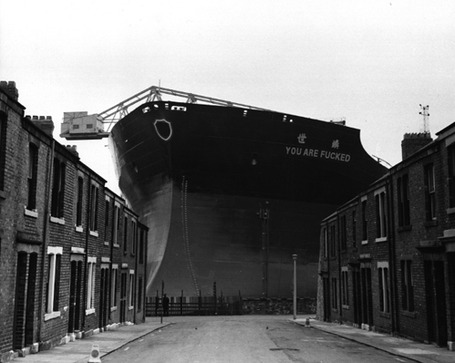 The mileage varies greatly on college football teams, but unfortunately for Memphis, a team already sputtering and smoking on the highway, this is a car fire and the fire department is busy doing everything else right now. You're gonna have to pee on it or just leave it there, Memphis fans: even firing their defensive coordinator Jay Hopson is likely just a brief stop on the way to complete Disasterville, since we're sure the Tiger defense is capable of giving up 600 yards even without Michigan's former linebackers' coach running the ship. (Yes, that's a Rodriguez defensive assistant. If one comes to your school, leap headfirst out of a window onto a hard surface from a great height.)

This is just a quick note to commend you for having the intestinal fortitude to tell it exactly like it is concerning the sorry state of the University of Memphis football program.  I appear in a different city around the country every week with the WWE and Memphis football is a laughing stock to the rest of the nation and an embarrassment to anyone from this city.  Stick to your guns, keep shouting the truth...Memphis football will never improve until both Porter and Johnson are gone!

---and Larry Porter goes directly into the Spanish language announcer's table. Like the best wrestling moves, Lawler's forearm shiver wasn't even necessary, as Porter has already been thrown off the toprope when his AD gave him the dreaded "vote of confidence" earlier this week. BY GOD KING YOU'RE RIGHT HE'S TOTALLY FIRED ALREADY. (Via.)