DOS AND DON'TS FOR THE 2011 FOOTBALL SEASON

Share All sharing options for: DOS AND DON'TS FOR THE 2011 FOOTBALL SEASON 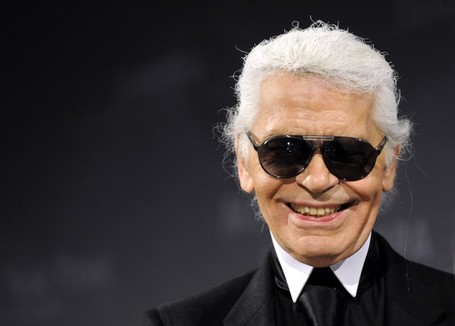 I today, Karl Lagerfeld, am to show what fashion is in college football. Follow! So close are these words fashion and fascism. Both are an order. Both despise sauces. Bearnaise is the weakness the French pour on the world to make its bones flimsy beneath the weights of unused calories. The bubble screen is the Bearnaise sauce of plays. IGNORE ITS ENTREATIES. They are more costly than you know.

Listen! LISTEN YOU SWINE. I love you and hate you.

DON'T: Play defense. Karl Lagerfeld believes in discipline. The fine line of a well-sculpted dress, the hemline accenting the full length of a man's leg, the left tackle sewn like so many fine baubles onto the rough material of a blocking scheme. THESE THINGS ENDURE LIKE THE PETRIFIED FECES OF THE DINOSAURS. Study them; mourn their vanished excrescence and present heft.

But too much is stasis. A game with too much defense is like the overcorseted woman. She is so cinched she sits like the chicken in the clay oven, bound and cooking in her own juices. Certainly she shall be delicious but also sacrificed to the garment. What is your Nicholas Saban but a glorified chastity belt engineer for your sport of football? Your Gary Patterson, a cricket ball swallowed by the hippo to obstruct passage of the nutrients through the system? Hippos must fertilize the shores of the Nile so that we may have the luxurious cotton of its farms, reader. Your defense, it is too much sometimes.

DO: Throw interceptions. Success panders to complacency. To be born anew, you must do it again, preferably differing in origin. If I could sate my desire for food merely by rubbing my belly, it would be done. Give your audience a think piece; reinvent the wheel by giving away a car. 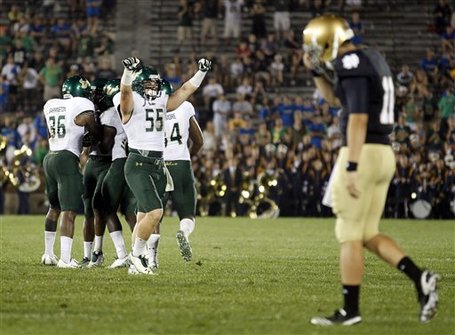 Yes! YES! YOU ARE DOING THIS CORRECTLY, NOTRE DAMES!

DON'T: The reshuffling of conferences and teams. In Europe we had this, too. It was called the 20th century. This shall end with Texas in ruins and Missouri occupied by filthy Russians. i mean this literally. The rapes shall be endless and worst of all completely without style or flair. Ahh, if only the Turks were involved! They know a stylish molestation, and also make excellent use of eggplant. WHEN WILL YOU STOP IGNORING THE HUMBLE EGGPLANT, CUISINE ALLEMAGNE? Ah, my people. Forever stuck in the permutations of perfumed pork in tubes.

DO: Pro Combat Unis. Beauty changes over time, and thus so should the uniform. After all, like many things, football is combat. Fashion is combat. This is why i shot Yves St. Laurent in 1982, and why I threw acid in the face of Isaac Mizrahi in 1993 at a party in Ibiza. Sensible French extradition laws, you do serve the artist so well! I also assault my waiters at every instance to remind them that fine dining is a battle. Having learned to dine with a gladiator's net thrown about my person has become one of Karl Lagerfeld's great pleasures.

DON'T: Obsess over wins and losses. The key to personal evolution is to do things, not merely to have done them. I'm open to literally everything; the moment you begin to scrutinize this moment in time, your time is over. For instance, I could have disdained the idea of the Lagerfeld Bulletproof Codpiece when it was brought to me. I am proud to say today that it is one of our most profitable products, and the pride of the Italian Police. They have lost not a single penis with it on watch. For this the 19 year old American students studying abroad there are undoubtedly grateful!

I am a football person, and football isn't merely about wins and loses — it's about the many derivatives of change. For it is a sin to own, but to collect is to be amongst the gods. Have it all; the appearance of splendor is to be splendid, the denial of grandeur is to have lived in vain. 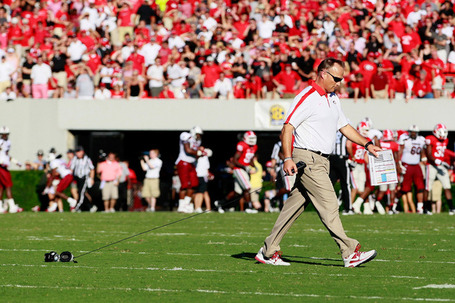 Isn't this right, Mr Mark Richt and your terrible unflattering pants. A MAN'S PANTS ARE HIS ARMOR IN LIFE!

DO: Get stopped at the goal line. To err is human. When I was given the reigns to Chanel, I was told "it's a corpse, it is done, it's so yesterday." I saw the blue print for new life and a cartographer's vision for success. Create your own identity through failure. Like a phoenix from the ashes, be born again. You must cost $200,000 but not look like you cost $200,000. BTW: an actual phoenix costs far more than this, and makes horrendous noises unfit for the human ear. Listen to them anyway. They will teach you.

DON'T:  Buy a fake phoenix. I had to burn five perfectly good and healthy golden eagles before i got a real phoenix. Terrible waste. Invest carefully. Roma will sell you anything and say it is a phoenix. THE ROMA LIE.

DO: Reading. I don't indulge in asides. My constitution is that of an Egyptian slave building a Great Wonder of the World. I was born to live and die by my own bruised and battered hands. However, when you must indulge, by all means, consume, and let the words' eloquence move you. The written word is truly typography's fashion.

DON'T: Reading. Books fill your head where stunning actual pictures could go. It is a heavy weight dragging you to the bottom of your mental ocean. It is also quite boring.

DO: Embrace challenge. On all fronts, do this. Did you struggle with, oh...Karl will say, some team like Toledo last weekend? Never mind that, and forge ahead unchanged. Listen only to your instincts. Karl Lagerfeld may be saying his because he has precious Euros on Miami to cover after a jellyfish farm investment came up short in Malaysia. Karl proceeds saying it anyway. CHANGE NOTHING. Please cover, Miami, or the chateau in Bordeaux is a lost cause, and will be left to the army of marmosets he loves so much. 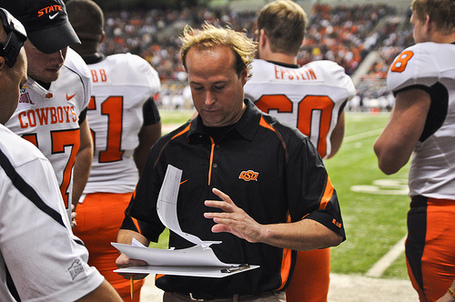 DON'T:  Ever wear a belt and suspenders. This makes you seem suspicious and untrustworthy. If I desire a foundation of trust, I ask a person to drop their pants on the spot, and then converse with me. Many of my best friends are the homeless. What is more trusting than sleeping in the street? What yet screams fashion more than living in the elements not just for your clothes to be seen, but the very parts of your person as you bathe in public fountains and defecate in plain view of schoolchildren? The homeless are our passion, a theme I explore in my next line. It is titled "Homo Hobo: A Species To Itself." All of it will smell like farm wine and the sadness of life. YOU WILL PURCHASE IT AND LOVE IT.