PRO COMBAAAATTTTTT [MORTAL KOMBAT] The new round of Nike's Pro Combat Uniforms are out, and first let us say how much we really like Michigan State's new uniforms. 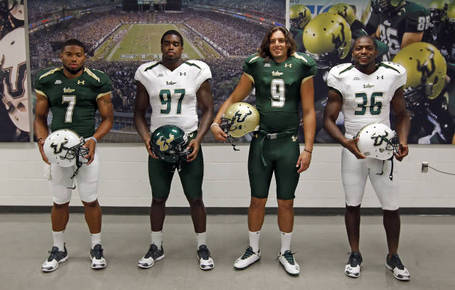 The new Sparty uniforms also actually feature the quote Leonidas uttered at the Persians in the battle of Thermopylae, a fitting tribute because the Spartans are named after the Spartans after all, and also because like Michigan State football it ends with everyone dying. The rest of them are here, and we recommend Navy's undershirt (a flag emblazoned with "Don't Tread On Me") and LSU's trippy tiger eye glove pattern. At last, LSU has the gloves to match Les Miles' soul.

BOBBY BOWDEN HAD PROSTATE CANCER IN 2007. He continued to coach through it and kept the matter private at the time, but it now encouraging every male to go to the doctor and let a trained physician stick a hand up their ass. We encourage the same, but ask to see credentials first, because you'd be shocked at how many people will just do this kind of thing without telling you they're NOT a doctor.

SCOOTER TERROR. Linebacker Dee Finley of our beloved Florida Gators was arrested for third-degree felony resisting arrest yesterday, but Huntley Johnson will surely get this plead down to a misdemeanor when this is all said and done. Finley was stopped on his scooter by UPD, and then pulled his hand back when a policeman grabbed him by the arm. No word yet on potential suspensions, etc, but Will Muschamp will "handle" the matter. Please recall that being arrested before the Tennessee game is a now a yearly rite of passage for someone, and that we obviously take tradition very seriously at the University of Florida.

HAHAHHAHA KEN STARR IS STILL TERRIBLE AT PR.  Preserve the traditions of Baylor football by opposing the collapse of the historic Big 12, a conference that is younger than Justin Bieber.

THIS IS THE GREATEST T-SHIRT EVER MADE. No, really, it is.

ETC: A vending machine we crave. All Brian Phillips does all day is slay bitches and work adverbs like a wicked forehand over the net of meaning.