Share All sharing options for: BETWEEN THE SYNAPSES: LOUISVILLE HEAD COACH CHARLIE STRONG

Between The Synapses is a series in which we examine the innermost thoughts and feelings of varied inhabitants of the college football galaxy.  Today's subject: Louisville Head Coach Charlie Strong, who watched his team drop a home game to FIU on Friday. 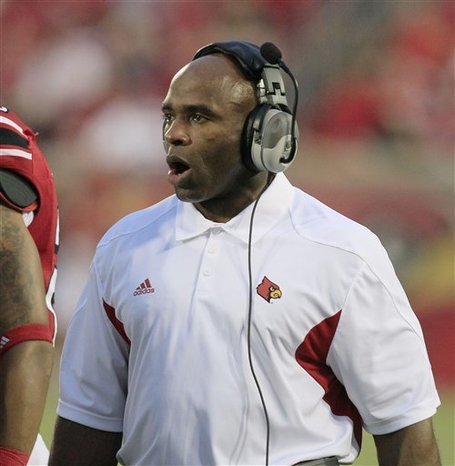 I bet for other people it's weird to have Thanksgiving dinner with your boss, but for coaches, it's normal. You know what's not normal? Drying dishes next to your boss and having him turn to you - OUT OF NOWHERE - and say:

"Charlie. You will never take my job. We can shut out 28 straight opponents and never allow another completed pass and you will never - NEVER - take my job. Listen to me, Charlie. You're a solid guy, and I like you. But the only way I am leaving the head coach's office at Florida is with bullets in both my knees and an animal control snare cutting off my carotid. People are gonna say, 'oh, Urban misses his kids, the job is too stressful, he can't keep going like this forever.' The only kids I care less about than my own are the juvenile goats I steal from Houston Nutt just so I can dump the carcasses in his above ground pool. You're not getting this job, Charlie. And you're not getting that last slice of Dutch apple, either." 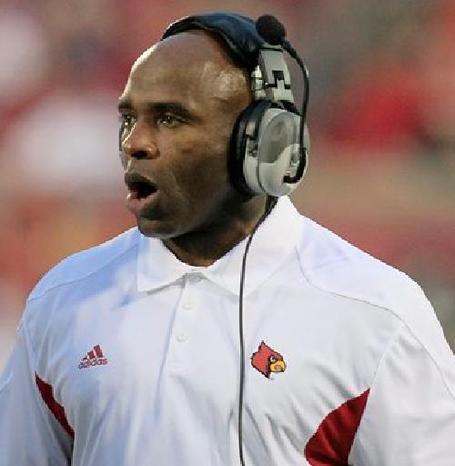 I mean, what was I SUPPOSED to do when Louisville offered me a job three days later? And then he has the damn nerve to retire - TWICE - right after I'm gone. So I'm stuck here suffering through athletic department meetings just praying, "please, Lord, don't let this be a chair Pitino sat in while he was wearing shorts."

(Will Stein throws an interception that is run back for a touchdown.)

Oh, but not to worry, Charlie, you've got an extra from High School Musical running the offense! I still can't believe we had to list him at 5'10" and 185 because the computer kept saying "ROSTER CONTAINING MEDICALLY UNSAFE PLAYER WILL VOID TEAM'S INSURANCE ARE YOU SURE YOU WANT TO CONTINUE (Y/N)?" 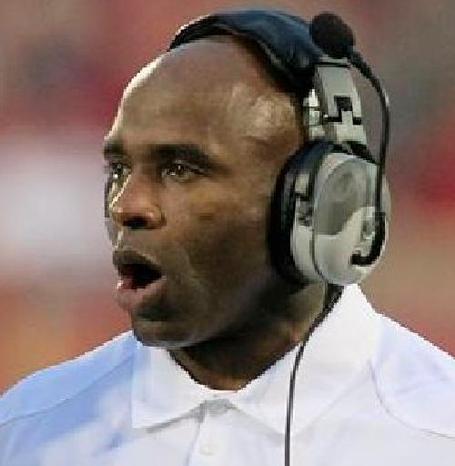 PEOPLE. DO NOT LET HIS NAME FOOL YOU INTO THINKING THAT, IF YOU LET HIM SCORE, YOU WILL GET FREE BEANIE BABIES AND/OR LATE CHECKOUT PRIVILEGES. YOU WILL NOT.

I cannot believe I put up with years of athletic directors telling me I "just wasn't a big enough name yet" and refusing to look me in the eye while they hired freaking Tim Brewster. The worst was when Lane Kiffin came up to me before the UF-Tennessee game in 2009 and said "Listen, I know how it feels to be passed over for years because everyone else is just jealous of your smoking hot wife. Fight the power, brutha."

And what do I get for all my trouble? Unless we pull out a miracle here, I'm gonna get called into the Director's office, and I just KNOW he's going to say, "Charlie, Papa John is not pleased." Bust my ass for 25 years so a guy named Schnatter can throw some V8 on an English muffin and make me call him Papa.

(With only seconds left, Will Stein throws a pass to Scott Radliff, who fumbles. FIU recovers the ball.)

You got it so damn good, Cristobal.