Gary Pinkel is so icy he calls TWO timeouts ON HIS OWN KICKER. Ball harder than that. gangster, and you can have this money roll, but not before you do it on national television. (That this topped a cameraman getting hit in the face says how funny Pinkel trolling his own kicker was, and does not include an incredulous Rod Gilmore doubting Pinkel's sanity.)

This is your first shift thread, encompassing Gameday, your inevitable lazy breakfast run, hangover treatments, and discussions of just how much Gary Pinkel hates his own kicker. Coach Gucci, what say you to such tactics? BRRRRRRRRRR--

Prepare yourself for the noonday slaughter of Oregon State by Wisconsin, Plain(s) Old Hate with Iowa/Iowa State, and the JP Forever Game and first bout of the SEC schedule, Mississippi State at Auburn. Prepare to be slain with RElfin magic, Auburn secondary. It's fun to talk to traffic cones sometimes, especially when they're painted to look like Auburn football players. So lifelike!

TV Schedule is in the big stream, Bielefeld is the Purdue of Germany, BE A DOG NOT A DANG OL' CAT, and after the jump Board Certified Scrotologist sends us photographic evidence that it's already getting weird(er) on the Plains in 2K11 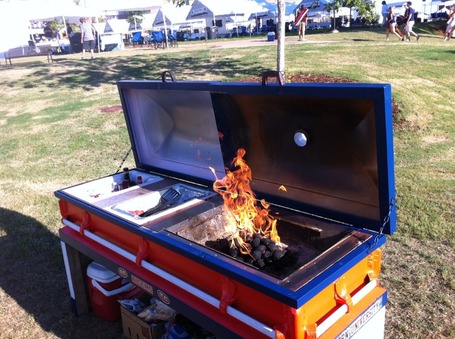