PERSASTRONG COMES TO BRISTOL, CT.  Christian Ponder for Heisman, please move over. We have a new favorite "Heisman Campaign Based On A Player Whose Arm Might Fall Off In Week Seven." 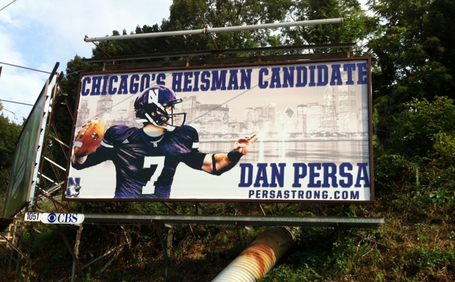 That beautiful scenery is Bristol, CT, and that pipe is the Adrian Karsten Memorial Drainpipe. Dan Persa is a quarterback for Northwestern, and according to the school is a candidate for the Heisman trophy. Like Northwestern itself, you will need extensive reminders of their existence from people who cannot believe you do not understand how special Persa/Northwestern are.

THERE ARE NO BODIES THEREFORE VONTAZE BURFICT DIDN'T REALLY HIT ANYONE, MAN. Sure, you say Erickson's hiding Vontaze Burfict getting in a locker room fight, but if there isn't a head rolling out the door and Burfict running after it kicking it like Lionel Messi loose in midfield, then this was not a serious fight. Please also consider the real live possibility that Dennis Erickson has no idea who Vontaze Burfict is, and does not know he is coaching "The Arizona State Sun Devils." #GoSeahawks

NOW THAT'S A TATTOO OF A SAMURAI KILLING A MUSKRAT, SIR. We would make fun of Jerel Worthy's tattoo, but he's Jerel Worthy and he probably just heard us say that SHIIIIIIIIIIIT RUN---

MMMMMM ALL ACCESS. ESPN's gone full Gatorish today after stiffing the local media for the entire spring, and we're sure that will go down well with everyone but ESPN. (Mike Bianchi: "Why UCF is Florida's true team!") Still, you get one day of pictures of guys in sleeveless training tops eating waffles and actual footage of Charlie Weis talking stacked linebackers and box counts before the curtain falls back into Sabanesque darkness, so take it while you can get it.

IT'S REALLY THE FIFTH SUSPENSION THAT MAKES YOU WONDER IF YOU'RE IN THE RIGHT PLACE. Stephen Garcia really considered transferring after his fifth suspension, which like the seventh divorce really makes you wonder if the institution in question is really suited for your needs as a person. He didn't transfer, perhaps because the draw of an academic slate including archery (FORE!) and a class on the Navy SEALs was too much for him to resist, or because the ass of Jadeveon Clowney turned out to be just as magnificent as promised. Only floating Matthew McConaughey knows for certain.

WE LIKE THE STYLE ESPECIALLY IF HE HAS FORMATIONS NICKNAMED SAN ANDREAS AND LIBERTY CITY. Chad Morris was firmly in the mad scientist camp at Tulsa, and if Dabo doesn't Dabo it up and get in his way as a coordinator at Clemson, there could be some actual non-pro-style offense worth watching in the ACC. Either way, that's a fine cover you have there, sir. Please turn to page 38, the "Kills Hooker And Takes Money Back" page of pass protections.

EERS EERS EERS. Bill's on WVU this morning, and HOLGO HOLGO HOLGO. If we had a college football fantasy league, Smith would be an easy first round pick, and if someone's willing to run it we might very well have one.

ERIC BIENIEMY STRIVES FOR PERFECTION. And instead, he gets Colorado football. :(

THE ONLY NCAA 2012 REVIEW YOU WILL EVER NEED. From Sexy Results! own Ian Cohen:

Besides each defensive backfield resembling an archipelago of Revis Islands, you will get sacked with astounding frequency if you don’t release the pass two seconds before a rusher comes into contact with him. And in terms of leading receivers on deep routes or zipping it in there, your quarterback will have the nuanced touch of Meg White.