YOU BE KILLIN' IT. His hair: it is the wing of a white raven signaling you to glory. 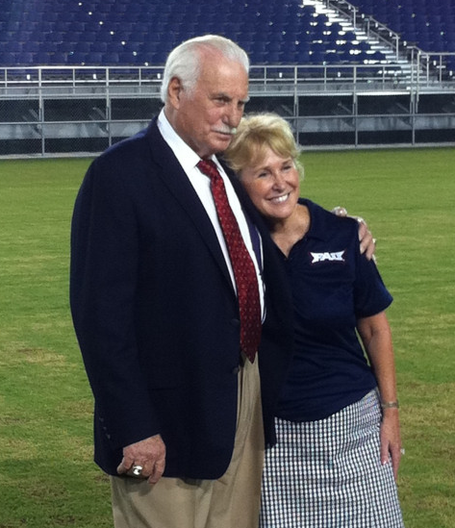 Oh, and just flashing this massive championship ring on the finger while cozying up to this fly Betty. He's Howard Schnellenberger. He does this every day whether he wants to or not, and it is awesome. Remember: those aren't suspenders, they are a safety harness he wears to protect himself from going through life at full Schnellenberger cruising speed. The G-Forces would kill lesser men, but we're not discussing them here, are we? (via.)

ALL-ACCESS MEANS WE GET TO WATCH JESSE PALMER SHOWER? RIGHT ON, BROS! Florida's fall practice gets all day on ESPN on Monday, a smorgasbord of coverage that will include but not be limited to:

We get to watch them eat? Oh, we cannot wait. "Did you see him skip his broccoli there? I DON'T KNOW IF JOHN BRANTLEY IS DEMONSTRATING THE PROPER LEADERSHIP THIS TEAM NEEDS." This may all seem a bit much, but when you see Charlie Weis and Dan Quinn on a webcam relaxing shirtless in a hot tub at the end of the day while Will Muschamp punches holes in drywall behind them at one in the morning, you'll realize how much you needed this. (Given that Florida's fallen behind Muschamp's media shield for fall practice, it's all you're going to get, too.)

OH ONE MORE THING I LEFT SOMETHING IN MY DESK. Surprise! It's a binding scholarship offer to my son, an unheralded quarterback who I just put on the team whether you like it or not. After reading this, we would not be surprised to find that Butch Davis had taken the copper wire from his office's electrical system on the way out, or siphoned the freon from the air conditioning.

Meanwhile at UNC, a former member of the student honor court has been charged with the theft of 31 academic records from the University. This is the same honor court that rubber-stamped the plagiarism of Michael McAdoo, and was complicit in academic fraud, but we're certain these two things are not at all connected. Nope. Stop that. Totally separate. (Would it surprise you at this point if Charles Robinson's ten out of ten story wasn't just a full expose on academic fraud for football players at UNC, the kind that would set the football program in the morgue locker for a decade? At this point, the answer should be "no." )

Their alums are ending up in Batman movies, so don't say John Bunting never did anything for Hollywood.

MAYBE WE REALLY DID MEAN JONATHAN TAYLOR THOMAS. Ohio State players who purchased "JT" bracelets to support the work of legendary talk show host JT The Brick received refunds when they returned the bracelets this week at the prompting of Ohio State staff. The return was considered "precautionary," and also because team physician Dr. Mike Vrabro said "medical studies have proven bracelets and shit are for bitches."

The refunds are believed to be valued at somewhere between $15 and $18,000, depending on who you ask.

NO RUN ON GOLD PAINT IN BOULDER. Jon Embree is going to put a gold-painted brick for every important victory at Colorado, and given their horrific schedule this year, that means you won't be getting many gold bricks in the wall this year. Meanwhile, T. Boone Pickens wonders why you put the word "-painted" after gold, you poor football program, you? His plan to have an all platinum Boone Pickens Stadium by 2015 remains in reach as long as his plan to monopolize the drinking water of India stays on course.

Colorado has lost 18 road games in a row going into the 2011 season. That is all.

THAT MAN GOING TO THAT IMAGINARY SCHOOL, IF HE EXISTED, HAS QUITE A STYLIN' MUSTACHE. "Purdue"'s new uniforms were shown off yesterday, and goodness me look at the crumbcatcher on Chris Carlino. The color scheme appears to invoke late '90s Vanderbilt, and that is probably as appropriate as their coach being named "Hope" is ironic.

READ THIS ONLY WITH WELDING GOGGLES ON.  Doc Saturday's comparison of Paul Wulff and Rick Neuheisel's respective hotseatedness is so sad we suggest you not read it if you are suffering from the slightest degree of emotional distress. It is the Grave of the Fireflies of football blog posts, and we are not exaggerating.

THOSE EYES HAVE SEEN HORRIBLE THINGS. Unspeakable things. Six receivers on a single play. Cleo Lemon starting a fight with a linebacker. Teams named "The Alouettes." Dear god don't even ask him about those inflatables over the tunnels. They haunt his goddamn dreams.

ETC: This really only hurt the people participating in it, which is why we'll probably do it again today. Dr. Steve Brule's best moments include our favorite type of wine, the kind you don't spit out. (No way, Jose!) That's erotica, not pornography. Trust us: we went to Florida, and of all the schools in the SEC we are the ones with the highest degree of pornographic literacy thanks to our school sitting in the home of the Bang Bus. Poems that mean nothing are our favorite kind unless you're writing about pillaging and arson. This is why linemen are the smartest people on the field.