FULMER CUPDATE: THE 2011 FINAL BOARD

Share All sharing options for: FULMER CUPDATE: THE 2011 FINAL BOARD

We have neglected EDSBS today in a flurry of radio interviews, administrative crap, and this year's edition of 100 Things About the Upcoming Season. (Hooker jokes take sculptin'.) A full day of content hits you like a Burfict's Burfict of Burfictness tomorrow. Brian hit a perfect tee shot onto the fairway with his penis, let Reggie Nelson take the second shot scramble style, and waited to applaud hitting the green in two strokes just to forward us the Fulmer Cup's final scoreboard of 2011. 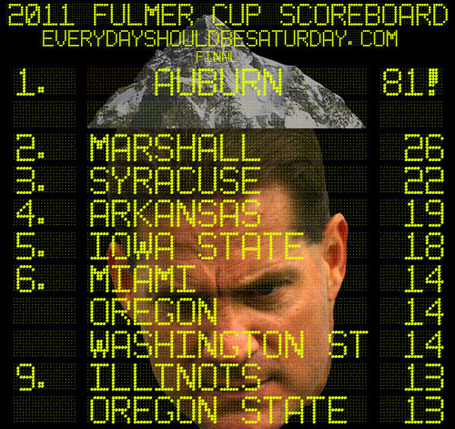 YOUR 2011 FULMER CUP CHAMPIONS: THE AUBURN TIGERS.  The Switzer Slam is complete: Auburn has won the BCS Title, the Heisman Trophy, and the Fulmer Cup Title all in the span of a single year. A record year generated record scores: 430 points were awarded in the Fulmer Cup in 2011. Even without Auburn's unassailable 81 points in a single shot, the Fulmer Cup handed out more points this year than in the entire history of the Cup. This is admittedly a small sample size, but still notable for being the most active year yet. Congrats, world?

Congratulations to the Auburn Tigers on this unprecedented achievement, and with this consider the Fulmer Cup 2011 closed. WAR DAMN LEGAL.

ONE LATE NOTE: Marshall did pull a NASCAR points-savvy move by nabbing the ELLIS T. JONES III AWARD for outstanding individual achievement at the last second. Wide receiver Troy Evans of the Thundering Herd went on a a robbery spree this past weekend, racking up four counts of armed robbery and one count of wanton endangerment to tally up fifteen felony points and one bonus point for sixteen points of individual acheivement.

He was not, however, the best hare to the foxes of the Huntington police:

Marshall steals the second place trophy, which is nothing. Congrats, Marshall.

The Fulmer Cup opens again at the close of business after the final second of the BCS Championship game. Please offer thanks to SAS Wiki for their Processing Station assistance, and for Brian the Boardmaster for his usual stellar work in illustrating the board.