THAT'S THE KIND OF DEDICATION AND FOLLOW-THROUGH WE LIKE TO SEE IN A GATOR. Jelani Jenkins war with a cockroach in his bathroom didn't end with one tweet. No, he chronicled the entire battle on Twitter, including alleging that the cockroach was both well-hydrated, equipped with ghost pro, and schooled in the art of psychological warfare.

that was a smart roach tho..i dont even think he wanted to hurt me i think he jus wanted me to think about him whenever i go to the bathroom

It's the bluff-blitz of insect/human warfare moves, that. Learn from his cunning, Jelani. We have no doubt you will.

PEOPLE ARE MISSING FROM GAMES FOR NEBULOUS REASONS. Miami (Via NCAA waves) has eight  suspended players for the opener, and you know why. Oklahoma State is suspending two for the opener, and no one's sure why. Bacarri Rambo is suspended, or not starting, and GOD DIDN'T MAKE RAMBO COACH RICHT HIS PARENTS DID WHICH IS TOTALLY NORMAL.

GARDEN AND GUN INTERVIEWS GENE CHIZIK AND THAT IS NOT A TYPO. We really just want this series to continue so we can get to the Nick Saban interview where he says he loved the "Women of the New South" issue, and they say "Really, coach?" and he says, "No, shithead" and pours acid on the interviewer before walking back into the film room. Writer: "Coach Saban taught me a lot about toughness that day." 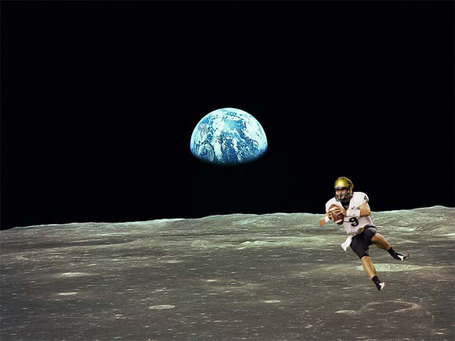 PRIORITIES. Why yes, that is Tank Carder's Rose Bowl MVP trophy sitting between two kickball trophies. BTW, Tank Carder reminds you to secure your biceps to your arm for safe transport. It's not safe to just tote guns like that around without taking proper safety procedures. At least three bands per bicep is the minimum for those with proper arm quads, son.

THIS IS NOTHING BUT GOOD NEWS. Eric Legrand, paralyzed Rutgers lineman, will join the Scarlet Knights' radio team for the fall. (Via.)

"INDIANA?" "HOPEFUL?" Dave Revsine of the Big Ten Network didn't ask it in the form of a question, but he probably should have given that it is a question about Indiana football. Oh, look at that: Off Tackle Empire just hobnobbing with Big Ten Network celebs, y'all. That's not an oxymoron. You'd shit kittens if the Barbasol Man rolled up to your house, and would be even more shocked when he demanded instant sex.

A USEFUL STATISTIC. Holly is already innovating the art of quantifying student-athlete behaviors at SI.

TWO MEDIA COMPLAINTS AND WE WILL LIMIT OURSELVES TO THIS. When a c--t* flaps its lips, it's called a queef or a Jason Whitlock column. Both are best ignored in polite company. Rick Reilly thinks the NCAA makes enough money from college football TV to influence its decision-making. Matt Millen thinks Jarrett Lee is going to fly down Monday night and play for Miami. The motto of this site still applies in 2011.

*Really, this is the only pure profanity we'll bleep here because you have to save one word out of the vast pile of profanities to keep as an unspeakable, sacred piece of filth. This is ours.

STOP BEING SHITHEADS KENTUCKY. No really, stop that shit. You're being assholes.

ETC: Already ordered this shirt twice. I AM A UCF KNIGHT. You really should go buy Drew's book, because it is awesomely depressing and filled with drinking and sex. We see this, and it will be in the final Fulmer Cupdate later today. Craig James had nothing to do with this.