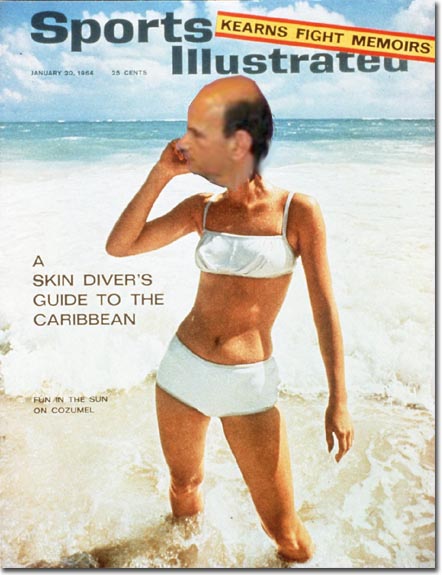 Added bonuses: Tammy giving Gary Smith's pieces some goddamn backbone and monster trucks pics in the middle for ADDED ALABAMA POWER! Danny Sheridan saying he knows where Terrelle Pryor hid Jim Tressel's corpse, but not saying for fear of a nonexistent lawsuit! Pat Dye sharing his tips for hunting raccoons out of a golf cart equipped with an M-60 and a wet bar! Gene Stalling grumbling at the squalor of it all! PAWWWWWLLLLLLL EDITING HOLLY HAHAHAHAHAHA.

HEY WHY DON'T YOU ENJOY SOME NICE READING. Brian starts at Chili's and ends up with the cosmic importance of Denard Robinson, and it's all as good as a set of hot Southwest Egg Rolls when you're really drunk and want fried vessels for liquid fat and salt, but don't actually want to just eat salted hot lard because society, norms, shame, etc. While we're discussing emotional Midwesterners, Sippin' On Purple is considering the last gasp of life as an undergraduate.

This lets us begin our EDSBS "It gets better" campaign, letting you know that college sports is never something you graduate from, and is instead an unhealthy obsession you carry into adulthood and to the grave. Remember that time someone looked at you oddly because you were yelling at a television in a nearly deserted BW3 off an interstate offramp because you lost the radio signal on the game, and then pulled over to watch your team lose? IT'S SO MUCH BETTER THAN YOU CAN IMAGINE, SIR.

BTW, we're working on our beginning of the season piece, and it's not weepy/emotional at all, and does involve the devil and Cookie Monster.

WE'LL BE BACK FOR OUR CLOTHES AND THE STUFF THAT IS OURS IN THE KITCHEN. Texas A&M moves closer and closer to leaving, and appears to have taken their toothbrush out of the bathroom.

SUSPENDERS NEVER LIE, AND NEITHER DOES SCHNELLY.  On the subject of whether Florida Atlantic stands a real chance against Florida in their opener Saturday, Mr. Howard Schnellenberger:

If our two programs were closer together in their development and level in which they are playing, yeah, it would be more difficult to get ready for a team like that. They have to understand that if they play a sound game and hard fought game they surely should win the game, he said.

Remember that the scoreboard will show a victory for Florida, the box score should show a lopsided exercise in domination, and the postgame handshake will be an absolute debacle in the fashion arena when a besuited Schnelly shakes hands with a slovenly, sleep-deprived Will Muschamp. One out of three gets you in the baseball hall of fame, Schnelly.

THIS MIGHT BE IMPORTANT. LSU has lost RG Josh Dworcyzk for some time thanks to a knee injury, diminishing LSU's advantage on the offensive line somewhat.  One possible replacement is La'el Collins, who should be good because he is from Krypton.

SUNNY WILL STEIN REMAINS SORT OF SHORT, ADORABLE, AND CONFIDENT. it is hard not to read Card Chronicle's bits on Will Stein without imagining them staring at him on the floor, legs crossed and laying on their bellies with their heads propped up on elbows. Don't think this is a bad thing, y'all: we're right there with you. [moons over Sunny Will Stein.]

CONDOLENCES. Mark Dantonio lost his father yesterday. Condolences all around.