Share All sharing options for: FULMER CUPDATE: THE PENULTIMATE SCOREBOARD

Brian took a break along with his friend Reggie Nelson from attending his support group for men with gigantic penises, Dong-a-Non, to make you this Fulmer Cupdate. Notes, points awards, and dire warning of Auburn pulling off the Switzer Slam follow. 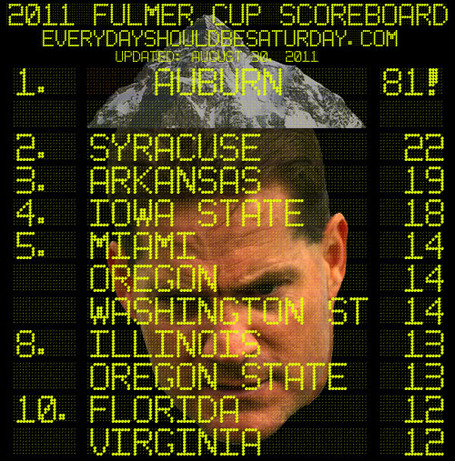 THE FINAL SECONDS TICKING OFF THE CLOCK. A notable first is upon us: the first Switzer Slam, the possession of the National Title, Heisman, and Fulmer Cup by one team in the span of a single year. This is truly new ground for the Fulmer Cup, but don't give Auburn all the credit. This would have been impossible without K2, some truly terrible decisionmaking by young, possibly potpourri-addled young men in need of cash, and the zealous prosecutors of Lee County who showered each of the accused in Auburn's home invasion with an avalanche of points-rich felony charges. No champions without team; no teams without committed individuals.

Barring Georgia's entire team going out and getting one count of disorderly conduct each from the pesky hand of the Athens PD, this is over. (And Georgia's saving all their disorderly conduct for their defensive downs against Boise on Saturday night! Wocka Grantham wocka!)

OKAY, FINALLY: LSU. The charges in LSU's Boot To The Head/ Jordan Jefferson Uses His Legs incident finally arrived, and let us say that the Baton Rouge Prosecutor's office, you are no Lee County charge whores: a mere two felony second degree assault charges, each worth three points a piece. We'll add in two bonus point for extra headkicking, but if this is a late run at the Fulmer Cup, it is...well, it's a Jordan Jefferson run. Eight yards, well short of the sticks, and sort of pointless in the grand scheme of things.

OLE MISS. Randall Mackey's drunken escapades were worth two points, but please don't forget Oxford police catching Jamal Mosley punk in drublic, as well. Marvel at the amount of alcohol it takes to get a tight end so drunk the police notice in Oxford, Mississippi, and then award three points to the Houston Nutt Oval of The Intoxicated.  '

OKLAHOMA. Courthouses must be very difficult to find in Oklahoma, because this has happened a few times to Sooner players: missing a court date, and then getting arrested for missing the minor court date. One point to the Sooners at the wire, and stop hiding courthouses in the Wal-Mart Supercenter, Oklahomans. It's so easy to get distracted by the electronics section on the way to your court date, and then the sporting goods, and what were we looking for again?

KANSAS. Oklahoma's neighbor to the north-ish also suffers from tiny courthouse syndrome, but Jayhawk Ben Heeney was doing something far more metal than missing a court date: drunk racin' in the middle of the night, son. The charges seem vague, so we'll just bundle them all into two points for a DUI, a point for street racing, a point for missing the court date, and a bonus point for doing what we all imagine restless people in the middle of the continent do: get ripped and burn tires at 3 in the morning until the police notice. The other things they do, per a cliched American cinematic imagination: fight staid preachers with dance, kill each other in strange farm cults, highway murder, and play out small sensitive indie dramas with lots of regional accents and long pauses in between dialogue.

HAWAII. This would be two points normally, but "Waikiki brawl" leads us to believe broken bottles and angry Polynesians were involved, and that's definitely worth a bonus point. Three points for the appropriately named Warriors.

COLORADO STATE. Two points for a party so large it made international news. Fort Collins ain't just chicken plants, less you count these chickens. [THIS SENTENCE BROUGHT TO YOU BY RICK ROSS INDUSTRIES.]

NOTE: The Fulmer Cup closes at 11:59 p.m. tonight, in keeping with our tradition of the day before the season being a day of amnesty. Like Spartans slaughtering helots, you do what you like that day, college football athletes of the world. No one's watching (except the police) (and your coaches.)