LET'S JUST GET THIS OUT OF THE WAY: FLORIDA GETS THEIR WILD BOYZ ON

Share All sharing options for: LET'S JUST GET THIS OUT OF THE WAY: FLORIDA GETS THEIR WILD BOYZ ON 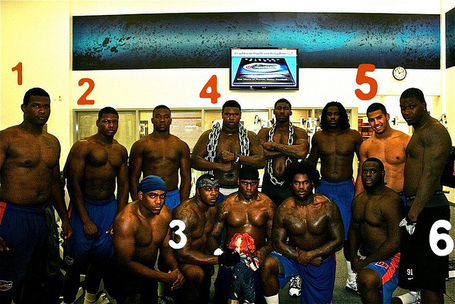 2. Just realized what a bad idea this was.

3. There is no greater differential between different ethnicities' impact on headgear and its interpretation than the bandana-as-headcover. On black guys, it implies the obvious: you are Ray Lewis, or one of his avatars fresh from prison and ready to whip some ass and kill people with a mere flex of your mean-mugging muscles. On white guys, however, it turns you into any one of a horrifying panoply of unrelated people: alligator wrestler and part-time meth dealer, overly earnest camp counselor, backalley dentist, Fred Durst or exurban Durstian strip-mall sex offenders, or middle-aged man who has become a "biker" in a desperate attempt to stave off the old age, or homeless person. This list includes every type of man you will ever meet in Florida. This is not a coincidence.

The bandana turns every Hispanic man into Gerardo, a 1990s gang film extra, mad artist, Zach De La Rocha,  or a construction worker. You can't even picture what it looks like on an Asian man, because no Asian man has ever worn a bandana, and indeed may be unable to wear one. It might just fly off their head, repelled by some kind of skull/fabric antimagnetism unique to Asians. Native Americans look just fine in bandanas, though. This is because you are racist, and cannot respond because we just called you racist and therefore win automatically. #internet!

Compare this to the singular implication across all races of wearing a baby fedora: that you are a douchebag, and have terrible taste in hats.

4. This is terrible jewelry. In fact, I think this is just some chainlink. I hope you didn't pay for this, because you can buy it at Lowe's for like nothing, man. At least hang some charms from it or something. Gussy it up, man. It's 2011. Ornament is everything this season. Yes, I AM the Anna Wintour of Alachua County, bitch.

5. Hey buddy! We love that he just wandered into the picture, didn't flex, and is so damn friendly and approachable. He could be on the cover of Non-Threatening Adolescent Boy, Lisa Simpson!

6. Is accidentally walking through picture, and like #2 just realized what happened.