THIRD CHANCES WOULD BE REFLECTIVE OF A TRINITY-FRIENDLY UNIVERSITY. Senior wide receiver Michael Floyd has been reinstated to the Notre Dame football team, according to UND.com, which posted this nice long interview with Brian Kelly where he explains his rationale for making the decision after Floyd's second alcohol-related incident. He also has an advantage over the previous four Notre Dame coaches in his ability to speak for long stretches without sounding a.) rabid, b.) lobotomized, c.) wacked on Haldol, or d.) like he's gustily lecturing a five year old about the virtues of the stop and go passroute.

We wish Floyd all the luck in the world in his attempt to "change his life," as Kelly said, but remind him that even if he gives up drinking, visualization remains a powerful method for enhancing athletic success. 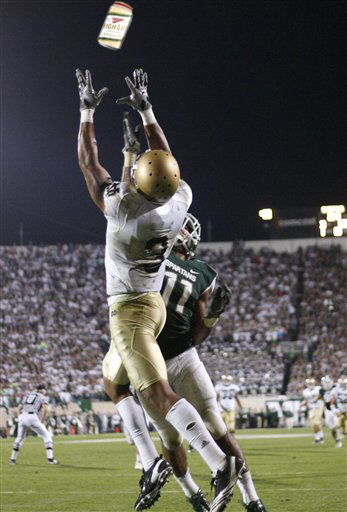 You lay out for that chocolate milk, Floyd. Beercolate milk. Whatever helps you catch it, dammit. I've got three years to turn around the job that's eaten three coaches in a row whole. Imagine it's my barbecued skull if it helps you catch the damn thing.

SEANTREL WILL HAVE MORE TIME TO HELP HIS FATHER MAKE RAP MUSIC FOR MIDDLE-AGED STAGE FATHERS. Miami offensive lineman and former blue chip recruitnik idol Seantrel Henderson may miss the entire season due to back surgery, and will thus spend the entire 2011 season rehabbing and attempting to survive the rigors of Al Golden's Cybex jungle. His father, if you'll recall, allegedly used his own aspirations as a rapper as a factor in helping his son determine where he was going to school, so there will be plenty of days to stalk Pitbull with the demo tape now. ("You'll love my jam about Zocor!")

CINCINNATI FOOTBALL DEMANDS CASH. The Big East's next tv deal, if and when it arrives, will be the most gratuitously oversized television deal of all unless the MAC agrees to move its operations to Dubai. Don't laugh: the MAC is totally moving to Dubai. In other Big East news, Brett McMurphy thinks TCU's move to the Big East will help keep Gary Patterson, and that is totally true until it is not.

A GOOD STORY THAT INVOLVES THE WORD "CANCER." Rob Long, cancer survivor and Syracuse punter, gets a call to an NFL workout. Please say a scout had to write "cancer" under "possible drawbacks," because that would make them feel as bad as they should about their jobs.

PENN STATE PREVIEWS WITHOUT OLD PERSON JOKES. Come to Bill C's Penn Schtaaaate preview and we promise no zombie or ancient underwear jokes about Joe Paterno. Okay, maybe just a few of them.

HE HAD TO BE THAT DUDE WHO COULD KILL YOU WITH A KNIFE FROM ALL THE WAY ACROSS THE MAP. Former OSU lineman Quinn Pitcock played up to 18 hours of COD a day, and we're stuck somewhere between disgust and admiration, because we bet he was INCREDIBLE at this game, and had all the guns and things and bombs and stuff. WHO NEEDS FRIENDS WHEN YOU CAN SUMMON VIRTUAL ATTACK DOGS WITH YOUR MIND? BTW, if you want a positive story about an Ohio State grad or fan, well we don't have one of those for you here, or especially here

REALLY DEVELOP THAT PERSECUTION COMPLEX, BRAH. Felder's right: it's important to becoming a proper fan, and especially relevant if you're a UNC fan who can point to this and say "SEE THEY'RE STEALING OUR RECORDS TO DEMOLISH OUR PROGRAM, PAWWWWWWLLLLL."

ETC.  The Least Watchable Teams piece was fun, but so was reading up on some of the teams we had never seen play. Stan Parrish should not coach the footballs ever for any reason anywhere ever. As for why we left off Mississippi State, Blutarsky? Because we liked watching them suck, so grandiose was their coach-killing horror. Plus they won four games, a lofty total for the group we described, and because they actually had a defense. The teams we described? Horrendous in every imaginable way.

Florida has new towers, and yes, they do look kind of prison-y. The CFL is un-Canadian in its violence and lack of manners here. North Korea is so alt, y'all. Necessary diagrams. Beauty pageants should always include a squatting portion of the contest.