BARRY SWITZER HAS THE POWER TO APPEAR AS A GHOST OVER THE SHOULDER OF LOSING BLACKJACK PLAYERS AND YELL JIBBERISH IN THEIR EARS.

Nothing in this makes any sense except Barry Switzer appearing as a ghost who hands out nonsensical blackjack advice to his former players. He can do this, but you have to drink enough fortified wine in order to properly ventilate the brain to let the SWITZER SPIRIT into your brainpipes.

Our Big 12 anti-preview covers the Big 12 in deliberately shoddy fashion, because everyone else has written previews, and we'd rather just talk about how Bill Snyder is the best recession football coach ever, and how we can't really hate Texas Tech even though we want to. Oh, and you're really good Oklahoma, and like you need to hear that again, you insecure football prodigies. you. (And Texas is looking like the Jailbait pick already.)  Bill tries to figure out the expansion game, and goooooood luck with that.

HEROES WALKING AMONG US. Virginia Union and St. Augustine played a college football game this weekend in the middle of a hurricane, and thus gave us the first truly great moment of the 2011 college football season:

The Panthers scored on a fumble recovery in the end zone when St. Augustine attempted to punt, but the ball was blown away as the punter dropped it to kick it.

The game also featured punts of -1 and -9 yards. There are two proper reactions to this moment in football history: laughter unto death, and this exact expression.

IT GIVES YOU WINGS AND A SEXY FIERO-MULLET. Dana Holgorsen's first confirmed Red Bull sighting in Morgantown. That he doesn't have a tap of the stuff just running free on the sideilnes at all times is a disgrace, but give Oliver Luck a few months to have the plumbing installed and this error will be rectified with a swiftness. 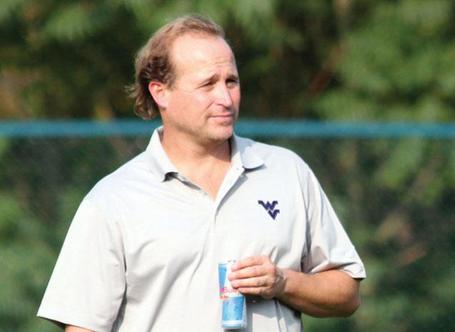 (You could just replace Bill Stewart's sweet tea pipes, but you have to do something about the horrible ant problem first.)

NICK SABAN IS A DICK TO EMPLOYEES' PARENTS. Nick Saban has mellowed from his glory days at LSU where he was famous for demanding excellence in stapling from terrified secretaries, but that didn't really begin until he got to Alabama and decided that making $5 million a year to coach football was enough to bring him back to bare minimum standards of human courtesy. ("$3 million? I SHOULD URINATE ON YOU FOR SUGGESTING SUCH AN INSULTING SALARY. I AM THIS CLOSE TO RAPING YOU.")

This all happened before Nick Saban was paid to be polite:

Not finding a fax machine in her son's home, Sally drove to an office supply store to send it. Thirty minutes later, Saban had not received it and called again. He had given her the wrong number, Sally said.

Larry, by far the more easygoing of Muschamp's parents, was irate.

"That son of a bitch," he said. "I'm surprised she didn't say, 'When it gets there, put it where the sun don't shine.' She didn't. But that's Saban. He and Will got crosswise in Miami for whatever reason."

They're as buddy/buddy now as two men bent on empire and bloodshed can be, but let it be noted that Will Muschamp's mother would totally take on Nick Saban, and that it would look a lot like this. #NickSabanIsShort

JACORY HARRIS IS A PENGUIN. AN INELIGIBLE PENGUIN. The anatomy of a penguin would explain his accuracy, but does little good in any efforts to have his eligibility restored before their opener this weekend along with the rest of the players suspended over the Nevin Shapiro Ho Barge Scandal.

EARL OKINE AND JON HALAPIO ARE FINE. The pair of Gator linemen suffered no major injuries in a car crash over the weekend. The semi truck carrying a full load of anvils they hit, however, was a complete fiery loss. #RIPAnvils

IF YOU MISSED IT: The NCAA's bitchcraft is STRAWNG.

ETC: A 19 year old's cookbook. Tiny Fuppets thanks you for supporting them, and not those impostors over at Junior Minis. The Troll Wall jacket will just be over here again for the next hundred CIs in a row if you need it. This is eerily accurate.