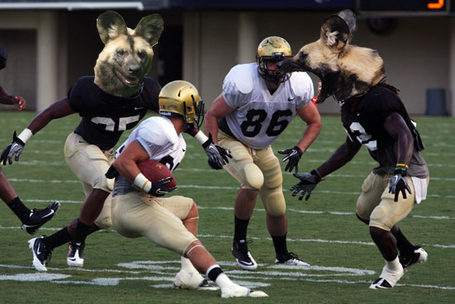 Wild African dogs and Vanderbilt football: a natural match, of course, like peanut butter and broken glass, Lou Reed and Metallica, and the eastern seaboard and powerful earthquakes. It's a metaphor, it's a teaching device, it's also a cult that threatens to transform the overachieving young men of Vanderbilt into howling beasts of the Serengeti.

You can just hear Vandy defensive coach Sean Spencer now, can't you? In that raspy, insane voice that all defensive line coaches have, because they are all deranged beyond hope?

Men, if you're really serious about this, you'll go out there and chase them like you are actual Wild African Dogs. We have like eight quarterbacks, so go ahead and just eat one, but make sure you share, and only leave teeth marks on Larry Smith. We need that one. The rest are fair game. You should also be peeing on things all the time. I don't care if your PC Northeastern classmates down for four years of paid vacation say it's politically correct. HOW ELSE ARE YOU SUPPOSED TO KNOW WHAT YOUR TEAMMATES ARE DOING? Urine is like Twitter you can smell! Watch this!

/sniffs spot on the ground

Coach Franklin left that spot right there, boys. It says "Dear Coach Spencer, how are you, buddy? Left some Krispy Kremes on the bench for you." How else would I have known that? Good teams communicate, men, and therefore good football teams pee wherever they see fit. Now enjoy this box of doughnuts I found out about via the Urethra Telegraph, and let this be a lesson to you all.